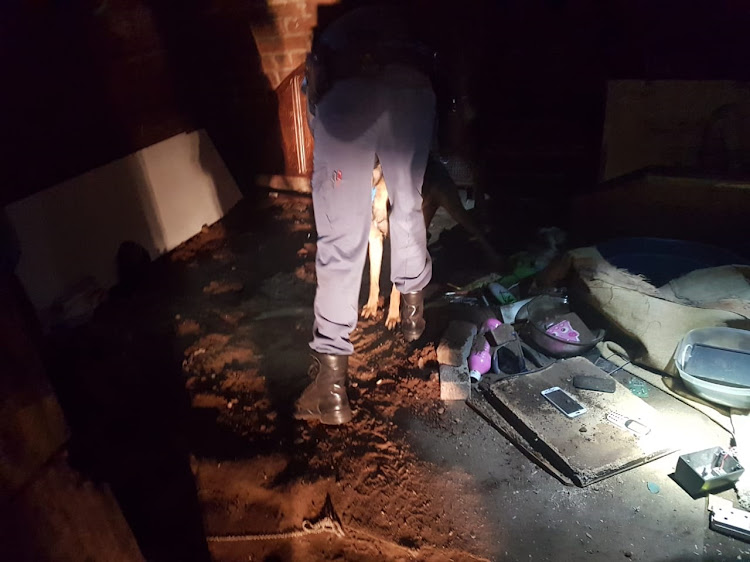 Police combing the scene inside a shack in Jeppe, Johannesburg, where two bodies were found in a shallow grave.
Image: SAPS

Police have launched a manhunt for two suspects believed to have been behind the murder of two people who were killed and buried in a shallow grave in a shack in Troyeville, Johannesburg.

Police spokesperson Captain Moscow Shihambe said the deceased were found buried under a bed at the property.

Shihambe said a 30-year-old woman was expected to appear in court soon after she was arrested in connection with the murders. The two bodies were exhumed after the female suspect alerted police about their whereabouts.

“The suspects apparently kidnapped the deceased and subjected them to torture … [After they were killed] they (suspects) dug a hole inside the shack and buried the bodies. With the help of the woman, they put a bed on top of the grave in the shack,” Shihambe said.

He said the woman was taken to the Jeppe police station where she was questioned before being detained. Shihambe said her accomplices are on the run and that a manhunt has been launched.

“We are appealing to the community to come forth with information of their whereabouts or information that could lead to their arrests,” he said.

"The shack was cleaned up, everything was in order like in a normal household … but the complainant and other neighbours were certain that something had happened to the two men," said said Police's captain Richard Munyayi.

The two men had been beaten up for several hours, with the perpetrators questioning them about the whereabouts of a firearm, according to eyewitnesses who spoke to the police.

Munyayi said a K9 unit was summoned to the scene where sniffer dogs made straight for a bed.

The bed was moved to reveal a "gruesome discovery", Munyai said.

The two male perpetrators - who are on the run - allegedly dug a shallow grave into which they placed the bodies and covered them with a mat, before the bed was moved into place.

A 30-year-old woman has been taken into custody for questioning over her part in the murders.

She is alleged to have beaten the deceased and to have cleaned up the scene.

A Port Elizabeth man who was beaten to death by an angry mob after being accused of raping a seven-year-old girl was innocent, police say.
News
3 years ago
Next Article