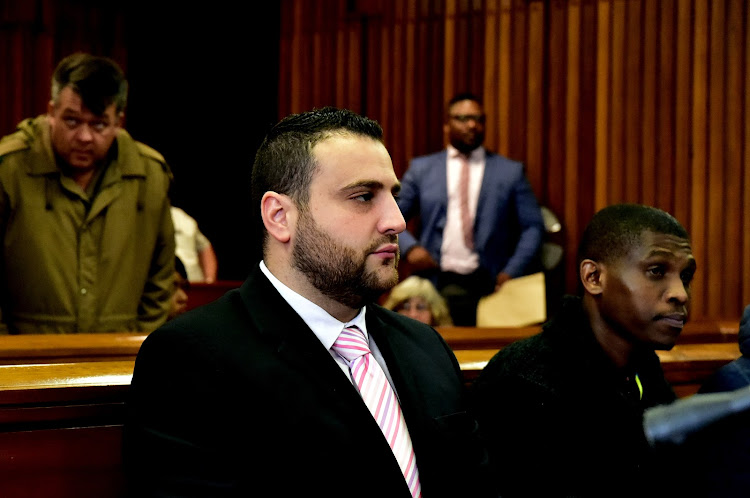 Convicted murderer Christopher Panayiotou has lost some privileges behind bars after being found in possession of a cellphone and sim cards in his single prison cell.

Panayiotou‚ who was sentenced to life in prison for the murder of his wife‚ Jayde‚ in Port Elizabeth‚ is serving time at the St Albans maximum correctional centre in the Eastern Cape.

Provincial correctional services spokesperson Vuyo Gadu told TimesLIVE on Thursday that the items were found in his cell during a search early in the morning of December 20 2018.

“The following contrabands were confiscated from the single cell of offender Christopher Panayiotou: an iPhone 6 cellphone‚ plus three sim cards‚” said Gadu.

“Offender Panayiotou contravened the regulations in the Correctional Services Act 111 of 1998 as he was in possession of unauthorised articles. As such his privileges will be reduced and this may reduce his amenities to less visits and telephone calls.

“It is the first time that he was found with such in his possession.”

Gadu said the department was busy with its national festive season security campaign‚ known as Operation Vala. “We have tightened security at our correctional facilities. We continue to urge the public not to assist offenders to smuggle in contraband items as this puts not only the safety and security of the offenders within our care at risk‚ but rather poses as a safety and security risk for all members of the community.”

For six months‚ the man at the centre of Jayde Panayiotou’s murder sent police on a wild goose chase across the province‚ with an undercover agent ...
News
3 years ago

Judge Dayalin Chetty sentenced Panayiotou to life behind bars in the Port Elizabeth high court for the murder of his wife‚ Jayde‚ SowetanLIVE reported in November 2017.

Jayde‚ a Uitenhage teacher‚ 29‚ went missing from outside her home in Kabega Park‚ Port Elizabeth‚ on April 21 2015. Her body was found in KwaNobuhle the next day.

Chetty found her husband guilty of masterminding the murder.

The breakthrough in unmasking the key figures in her murder came after Capt Willie Mayi‚ the head of the police’s vehicle-hijacking team‚ received a call from an informer.