State wraps up case against Panayiotou 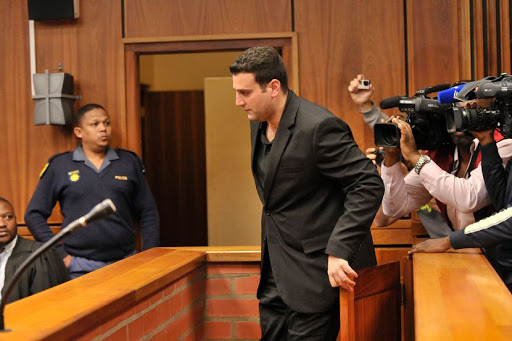 The state has called for businessman Christopher Panayiotou and his two co-accused to be convicted of the murder of Panayiotou’s wife‚ Uitenhage teacher Jayde Panayiotou.

Summing up months of testimony in the Port Elizabeth High Court‚ prosecutor Marius Stander said on Thursday that it was clear Jayde’s death was a contract killing.

Referring to deceased suspected hitman Sizwezakhe Vumazonke‚ Stander said the evidence against him was “massive” and that he would have been the first accused to be pinned down as one of the killers.

“Vumazonke‚ through SMS messages‚ made reference to other people that helped him [carry out the hit]. The court must find that the guys who helped him were Sinethemba Nemembe and Zolani Sibeko‚” Stander said.

He said Judge Dayalin Chetty merely needed to find that Vumazonke was involved in the hit and that it all unravelled from there.

He said the evidence against self-confessed middleman Luthando Siyoni‚ the state’s Section 204 witness who later recanted his version‚ was also damning.

“The hit money was ultimately found wrapped up in socks in Siyoni’s gym bag. His confession may not be used against the accused before court‚ but it can certainly be used against Siyoni‚” Stander said.

“Once the court finds that Vumazonke was involved in the murder and that Siyoni recruited him‚ the remainder of the state’s case becomes very simple.”

He said the alleged hitmen would only have known Jayde’s particulars – such as her car registration number and her route to work – through her husband.

The involvement of Panayiotou is proven by a video recording – which was leaked to the media in June (https://www.timeslive.co.za/news/south-africa/2017-06-14-watch-the-secret-recording-between-panayiotou-and-middleman-siyoni/)‚ but was found to be admissible in court‚ in which Christopher Panayiotou is filmed speaking to Luthando Siyoni.

The defence will deliver final arguments on Tuesday.