Young boy and his uncle killed by lightning in Limpopo 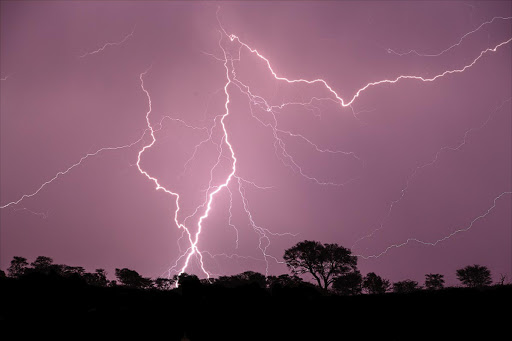 A 40-year-old man and his five-year-old nephew were sitting under a tree outside their home during a thunderstorm when they were struck by lightning.
Image: iStock Image

Two people, including a young boy, were killed after they were struck by lightning during a thunderstorm in Ga-Molepo, Limpopo, on Thursday afternoon.

Police spokesperson Cst Mienkie Ramakgoakgoa said on Friday that a 40-year-old man and his five-year-old nephew were sitting under a tree outside their home during a thunderstorm when they were struck by lightning.

Lightning likely cause of fire that damaged Mpumalanga classrooms

Seven classrooms caught fire after an apparent lightning strike at a school in Barberton‚ Mpumalanga‚ the department of education said on Thursday.
News
2 years ago

Ramakgoakgoa said they were taken to a local clinic and were declared dead on arrival.

"Community members are advised to be extremely careful during thunderstorms and must avoid being under trees.

"They should instead seek shelter in houses or safer places to minimise the possibilities of incidents of this nature from occurring," Ramakgoakgoa said.

An inquest docket had been opened.

In a separate incident, an elderly couple were killed after being struck by lightning in a village in Ngqamakhwe, Eastern Cape.

Police spokesperson Capt Jackson Manatha said an 84-year-old woman and a 64-year-old man had been on their way home from an initiation ceremony on Thursday. They were declared dead on the scene.