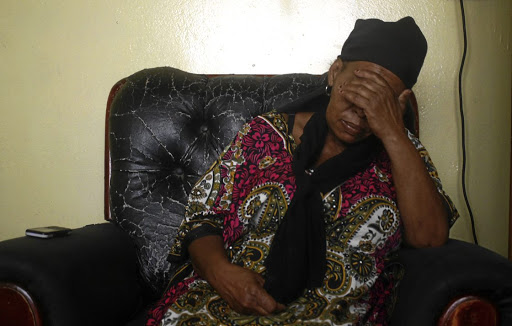 Sarah Takalo's son was robbed at gunpoint after returning from the bank where he had gone to withdraw R10,500 for the funeral of a family member.
Image: KABELO MOKOENA

A Soweto man has detailed how he and his family were robbed off R29 000 in their home two days before he could bury his mother.

Bofelo Masudubele, 28, told Sowetan yesterday about the brazen robbery by two thugs who had followed the family from the bank at Maponya Mall, where they had withdrawn a large sum of money last Wednesday.

The money was intended to be used for logistics such as hiring a bus and food for mourners.

Masudubele's mother, Patricia, 61, died two weeks ago and was buried on Friday. Masudubele said he thought the two thugs were well-wishers who had come to their home to pay respect.

Taking bags made targets for thieves
Lifestyle
2 years ago

"I was with my sister and brother and we had just returned from Absa at Maponya Mall. We withdrew R29 000 which was deposited from a funeral policy," Masudubele said.

He said they divided the money and placed it into two envelopes which he placed in his backpack before running a few errands.

Less than a minute after arriving at their Meadowlands home they were ambushed by two gun-wielding thugs.

"We had not even settled down when they walked in. They seemed decent and we didn't think they would rob us. They both took out their guns and pointed them at us. There were about 10 people in the house at the time," said the
28-year-old.

"They instructed us to lie on the floor and I was instructed to hand over the money while the other one walked around the house looking for my relatives so that he could rob them of their cellphones and car keys."

In less than five minutes, the robbers left with six cellphones, purses, car keys and the money.

Thugs dispossess Steven Pienaar of his valuables yet again

Rolex watch, iPhone taken in a hold-up.
News
3 years ago

"They didn't take any car, just the keys and cellphones so that we couldn't call anyone or attempt to give chase."

Two days before the family was robbed, another mourning family in the same area had also been targeted and robbed of R10 500.

Sarah Takalo, told Sowetan that his son was robbed at gunpoint before he could reach home after he had returned from the bank.

"The money was meant to be for a cow and a sheep. We had to rely on donations to cover the loss," Takalo said.

Police spokesperson Capt Hitler Ngwenya said investigations were under way. No one has been arrested.

"We urge the members of the public to refrain from making withdrawals of large amounts of money because it makes it easy for criminals to rob them," said Ngwenya.