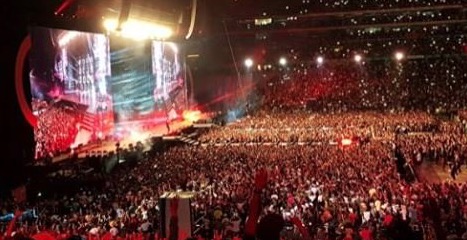 The Global Citizen Festival at the FNB stadium in Soweto on Sunday.
Image: Jessica Levitt

I was caught up in the nightmare that greeted fans outside FNB stadium after the Global Citizen Festival last Sunday. There are a number of reasons for the perfect maelstrom that left young concertgoers vulnerable to thugs.

I attended the festival with my teenage niece, and before we left home, we read the endless list of rules and regulations that one needed to adhere to, including the size of bags allowed.

Hopes high and carried by the spirit of Madiba, we took an Uber to the stadium and did not even ask questions when security officials refused to let Uber into the designated drop-off zone.

These are some of the disorganised elements that made concertgoers easy prey for robbers:

Public transport and Uber pick-up point lumped in one spot

This led to heavy congestion as buses from all over Gauteng competed for the same route with taxi-hailing services. For big events, it should be logical that these drop-off and pick-up points be a distance away from each other to prevent congestion on entry and exit routes.

The closing off of some gates and main roads

In order to reserve a part of the stadium strictly for the hordes of VIPs who were part of the event, alternative roads into the stadium were closed off and, surprisingly, they remained closed hours after the music had stopped and the VIPs had left.

The organisers went to great lengths to secure the comfort and security of the many representatives and heads of states and their motorcades. They even cordoned off a vast section of the stadium for use only to these VIPs, and that also meant that inside the stadium only two ATM points were left to cater for hundreds of thousands of revellers.

The VIPs in the suites were well hydrated throughout the day and bespoke caterers took care of their whims while fans waited in queues lasting up to two hours to withdraw cash. Only a handful of vendors used speed points. Why banking sponsor Nedbank did not bring in mobile banks is beyond comprehension.

It's wifi era but kids' mischief with phone doesn't change

In my youth, the most common trickery we tried on our parents was to run the telephone bill during the day when they were at work.
Opinion
3 years ago

It points to organisation that did not consider the needs of fans who spent the whole day there from 11am to 12pm.

While some Clever Alec in the organisation committee saw it fit to stipulate that only bags that were 6cm by 12cm were allowed, many young women carried medium-sized bags and backpacks out of practicality for the items needed throughout the day. Those with bigger bags had to leave them at the gates.

I was concerned that the bag confiscation process left young men and women stranded. Many who left their bags at the security checkpoint had to choose a few items they needed, such as cellphones and wallets.

Carrying wallets and cellphones around in their hands made them targets for thieves. These thugs clearly called in reinforcement when they realised the easy pickings, much to the shock of revellers when they were targeted.

I watched four thugs trying to rob a young man as we walked to the taxi pick-up point.

Due to taxis failing to access the pick-up point, the story of how hordes of fans were lucky to even reach their homes as the day was breaking is all too common now.