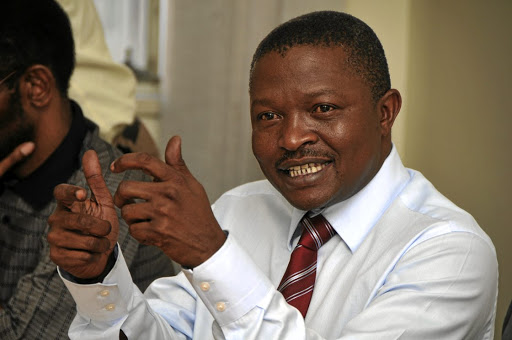 Deputy president David Mabuza will be questioned about his Russia trip.

MPs are planning to probe deputy president David Mabuza about his recent mysterious trip to Russia‚ where he reportedly went to receive medical attention.

Mabuza's trip to Russia and his health condition were the subject of discussion on Thursday morning at a meeting of the National Assembly's programme committee where the deputy president's parliamentary counsellor‚ Ebrahim Ebrahim‚ revealed that he's confirmed his availability to take oral questions in the House next Thursday (November 22).

Mabuza was due to answer questions last Tuesday in parliament's second house‚ the National Council of Provinces‚ but the session was postponed and it later emerged that he was not well and had flown to Russia for medical treatment.

ANC chief whip Jackson Mthembu said he told the National Assembly programme committee that Mabuza's office informed him last week the deputy president was not well‚ adding he had no reason not to believe such correspondence.

Mthembu was responding to DA chief whip John Steenhuisen after he said there needed to be clarity on the matter following remarks by Mabuza's spokesperson that the deputy was "on sick leave but not ill".

Mthembu said only a "deranged person" would make such a statement.

He has visited Russia on a few occasions, allegedly with the help of the Guptas offering their private jet.
Opinion
3 years ago

"On matters like these we rely on correspondence we get from the relevant office‚ not from some reported comments by some spokesperson‚ so indeed the letter we got from the office of the deputy president was that he's sick‚" said Mthembu.

"We have no way of questioning that letter. Perhaps the deputy president would then get in touch with his spokesperson on his comments because you can't be well and be on sick leave [at the same time]."

"That's what the spokesperson said‚ that there's nothing wrong with the deputy president but he's on sick leave but he's not sick. Now it's only a person who is a little bit deranged that can make such statements."

Steenhuisen said of Mabuza: "He is coming to answer questions and we look forward to getting to the bottom of this when he's in the House (parliament)."

National Assembly Speaker Baleka Mbete‚ who chaired the NAPC meeting‚ also said there was no reason not to trust the correspondence from Mabuza's office.

"If we don’t trust the correspondence between the offices‚ we get into very troubled terrain. I would rather not trust comments that are made publicly than not trust what is on the record ... it's the official communication."