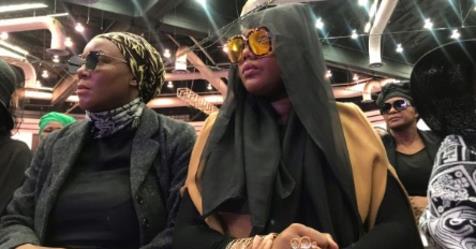 Lerato Sengadi seated next to her mom at Jabba's funeral.
Image: TshisaLIVE

Thousands of social media users have come out to strongly defend well-known publicist and Jabba's wife‚ Lerato Sengadi against the "treatment" she's received at his funeral currently underway in Mahikeng.

Mourners gathered at the Mmabatho Convention Centre on Saturday morning to bid farewell to the Bosso hitmaker.

Even though the South Gauteng High Court ruled on Friday afternoon that by law Lerato is Jabba's customary wife‚ it seems the musician's family still does not recognise her.

Lerato filed an urgent court application to halt Jabba's funeral‚ however this was denied by Judge Ratha Mokgoatlheng‚ who implored her to practise the spirit of ubuntu.

Judge Mokgoatlheng dismissed Robert Tsambo's argument that Lerato was not his wife‚ stating that by law Jabba and Lerato had entered into a customary union.

As Jabba's funeral service got underway social media users noticed how Lerato was seated away from the Tsambo family‚ how Jabba's sister acknowledged everyone except her and how Lerato was not included on the obituary.

A raging debate surrounding the manner in which Lerato has been treated has since dominated the Twitter trends list.

Fans have applauded Lerato's strength and have slammed the "ill-treatment" that women have apparently endured at the hands of in-laws for generations.

HHP took his own life on October 24 after a lengthy battle with depression. He will be laid to rest at Heroes Acre at Mmabatho Cemetery.

IN FULL | Read the obituary of Jabulani ‘HHP’ Tsambo as written by his family ??? #HHPFuneral pic.twitter.com/xZfr39fxL5

If I was Lerato I would exhume the body and go have the funeral my husband wanted. Ubuntu was forced on her. Ngingenzela nje ukuba fundisa abantu !!! #HHPFuneral

There is a whole lot of women who are in Lerato's shoes daily. . . Some in-laws are mistreating boMakoti. Let us marry into families with love. #HHPFuneral

The young sister acknowledging the mother of the child (Leano's mother) totally unnecessary
Lerato Sengadi qina girl. Let's hope she will be subjected to this treatment from her in-laws as well, so that she will know, what you're going through #HHPFuneral.

Lerato Sengadi, after the funeral ungene emotweni and come back with your squad, that supported you. You went there, regardless of not being acknowledged, but you didn't go there for people, you went there to bury your husband. You refused to be "bullied" by in-laws #HHPFuneral