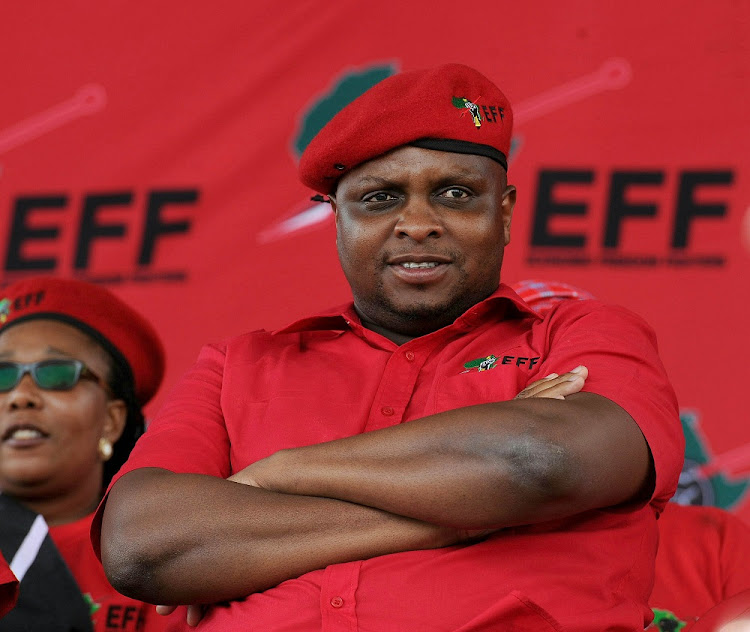 EFF chief whip Floyd Shivambu met his match in Speaker Mahlake‚ a representative of landless people who left the outspoken politician speechless during a heated meeting in Parliament on Thursday.

This was during the first day of the latest round of public hearings into whether the constitution should be amended to provide for expropriation of land without compensation.

Shivambu had questioned the bona fides of an organisation representing landless people which also opposes the proposed amendment of the constitution to provide for expropriation of land without compensation.

“Fortunately enough‚ we are not funded by VBS‚” snapped Mahlake obviously referring to a recent media report which claimed Shivambu and the EFF received money from the embattled bank.

While Mahlake's organisation‚ the Land Access Movement of SA [Lamosa] does not oppose the amendment of Section 25 of the constitution‚ it supports it for different reasons to the EFF. It only wants an amendment that would “clarify” the section and proposes that land reform should be listed as a compensation factor; another amendment which explicitly states that compensation to owners may be zero rand and that farmworkers and occupiers be compensated separately from owners. Lamosa was adamant the government would have to compensate banks separately for bank-held loans “which are collatelarised by land”. This raised a few eyebrows in the meeting.

The organisation suggested that Parliament needs to pass an expropriation law that would address categories of people who would be affected by expropriation of land before any amendments are made to Section 25 of the constitution. They said this was in light of government's failure to adequately implement land reform and transformation.

An amendment to Section 25 of the constitution has the potential to undermine all property rights.
Business
3 years ago

During a question and answer session‚ Shivambu noted that throughout the public hearings on this proposed policy‚ white people and all black people who were accompanied by white people when they made their submissions opposed expropriation of land without compensation and the amendment of the constitution. Mahlake was accompanied by a white lawyer‚ Henk Smith. Shivambu accused the organisation of making “extremely reactionary submissions” which he said were not consistent with an organisation representing landless people. He wanted to know about the structure of the organisation‚ its funders and who pays for its lawyers‚ a question which was overruled by committee co-chairperson Stanford Maila (ANC).

At this point‚ a number of MPs opposed to expropriation without compensation were heckling Shivambu and objecting to his line of questioning‚ while the UDM's Mncedisi Filtane‚ referring to Lamosa‚ shouted in the background: “They are in white pockets...”

The UDM supports the motion for land expropriation without compensation.

“I find it a very inflammatory‚ racist statement to refer to 'all whites want this‚ all blacks want that'‚” objected a seethingFreedom Front Plus chief whip Corne Mulder.

He explained that they were in fact an NGO and lawyers offered their services for free.

The entire meeting was characterised by heated exchanges and racialised outbursts between MPs and against organisations whose positions they opposed.

With just three weeks remaining before the joint constitutional review committee reports back to parliament with recommendations on the proposed amendment‚ MPs both for and against the proposal seemed to push their parties' political positions in the manner they engaged presenters who appeared before the committee and against each other.

MPs who oppose the motion to amend the constitution grilled presenters on how they thought the government would be able to implement such a policy when it has “grossly failed” to transform land ownership and implement land reform.

The pro-expropriation MPs – mainly EFF and UDM - suggested those groupings who opposed the amendment were opposed to transformation and to changes to the patterns of land ownership.

ANC MPs while in the majority were more circumspect in their approach. The FF Plus‚ Democratic Alliance and African Christian Democratic Party stood together on the other side.

Organisations‚ pro and anti expropriation without compensation all blamed the government for failing to properly implement land reform saying this had led to a crisis that the country finds itself in.

Shivambu and the EFF have denied receiving money from VBS and have challenged anyone with such information to bring it forward or lay charges with the police.