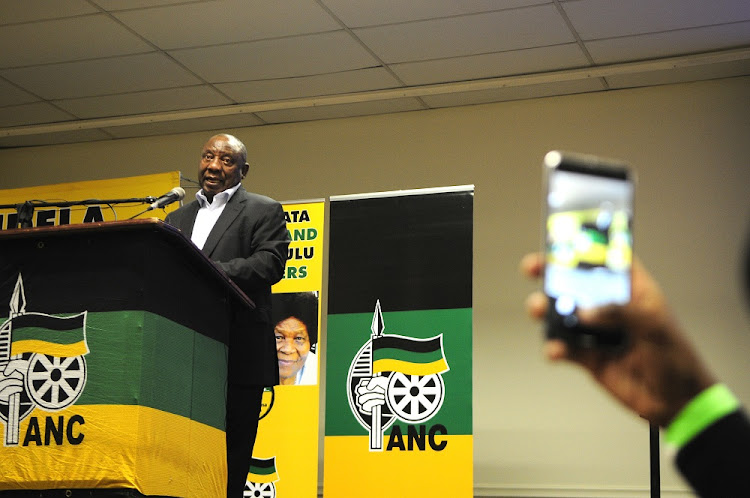 President Cyril Ramaphosa announced that his party, the ANC, resolved to push for the Constitution to be amended to allow for land expropriation without compensation.
Image: Thulani Mbele

An amendment to Section 25 of the constitution has the potential to undermine all property rights‚ which could hurt the financial sector and the broader economy.

This was the warning from the Banking Association SA (Basa) on Friday.

Basa is the industry body representing all registered banks in SA. Banks have about R1.6-trillion in property loans‚ including for land‚ commercial property and home loans.

The association said changes to the property clause would also undermine SA’s efforts to address the triple challenge of unemployment‚ poverty‚ and inequality.

Land to be ‘demonopolised’‚ not nationalised - Mbalula

The ANC says it will not nationalise land in South Africa through expropriation without compensation.
News
3 years ago

The joint constitutional review committee is holding public hearings on the possibility of amending Section 25 of the constitution to make it clear how land could be expropriated without compensation.

The EFF is pushing for a blanket approach to land expropriation.

In his submission to the committee‚ Basa MD Cas Coovadia said that while it was essential for SA to deal with land reform‚ this had to be done without discouraging investment.

“We need to be careful about tinkering with the constitution. I am certainly of the view that we have an enabling constitution‚” said Coovadia‚ adding that there was no need to amend the constitution to address land imbalances.

“We can do all of this without amending Section 25. Section 25 is a mandate for transformation. It talks of just and equitable compensation. This can range from zero to above market value‚ depending on individual circumstances. So expropriation without compensation is possible under current law in certain circumstances‚” said Coovadia.

There’s no peace without land‚ Mabuza tells the NCOP

Deputy president David Mabuza on Thursday said peace and stability was unimaginable in South Africa if land ownership remained in the hands of the ...
News
3 years ago

“If we change Section 25‚ this has the potential to undermine all property rights. In the world we live in‚ property rights are important - particularly for the financial sector to enable us to provide banking services.”

He added that under current law‚ owners of property would still need to settle any outstanding amounts with the banks‚ even when the property is expropriated without compensation.

“If I have a farm and land is expropriated‚ legally I am liable for the loan because I have an agreement with the bank‚” said Coovadia.

“These are issues which create uncertainty - and when you have uncertainty‚ people start making other investment decisions.”

He warned that an expropriation-without-compensation policy would result in high levels of debt impairments and the value of property as security would be reduced‚ with many investors looking to divest from property to avoid future losses.

African People's Convention MP Themba Godi‚ however‚ suggested that Basa’s statement that an amendment to Section 25 would undermine all property rights was “scare-mongering.”

The Gauteng government will not disclose land identified for expropriation without compensation.
News
3 years ago

Pierre Venter‚ Basa's general manager for the human settlements cluster‚ said property is all about long-term investor confidence. “If I don’t have confidence in the biggest purchase of my life - that it will be taken away without being compensated - I will not invest in property. This has the potential to undermine property rights‚ if you do not create that confidence‚” said Venter.

Basa called for a land summit and the establishment of an ombudsman for land reform‚ among other proposals. The land summit would review the land-reform programme and give interested parties an opportunity to discuss whether compromises should be made. The creation of an ombudsman would also create a level playing field for people seeking land restitution.

Tanya Cohen‚ CEO of Business Unity SA (Busa)‚ also told the committee that an amendment to the constitution is not necessary. Busa represents organised business in SA.

Cohen said the business sector acknowledges the urgent need to address the persistent effects of apartheid-era land dispossession. “Business is‚ however‚ concerned by a response that focuses on constitutional reform‚ rather than addressing the endemic structural and administrative challenges in implementing land reform‚ which has been riddled by inefficacies‚” she said.

Busa endorsed the view of the high-level panel on assessment of key legislation and acceleration of fundamental change‚ headed by former president Kgalema Motlanthe‚ as well as of Operation Phakisa‚ that the existing constitutional framework is not an obstacle to sustainable land reform.

In November‚ Motlanthe tabled a review of key legislation in parliament. His high-level panel proposed that instead of amending the constitution‚ the government should use its expropriation powers more boldly in ways that test the provisions in Section 25 (3)‚ particularly in relation to unutilised or underutilised land.

The panel also found that a lack of leadership and policy direction‚ corruption and inadequate budget were to blame for SA’s failed land reform. The budget for land reform is less than 0.4% of the national budget‚ with less than 0.1% set aside for land redistribution.