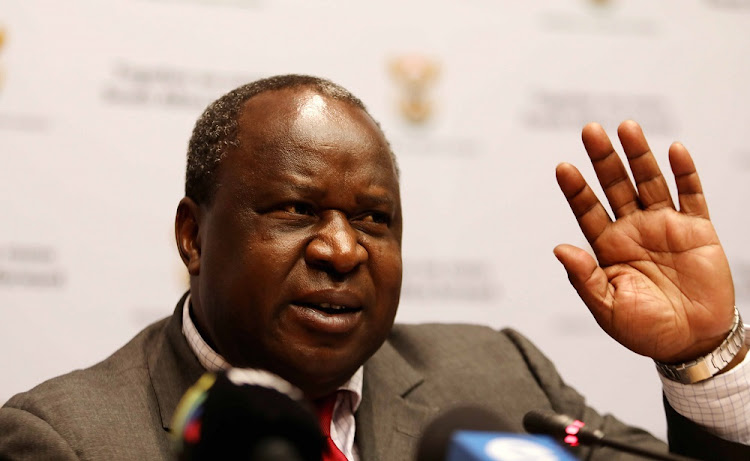 Finance minister Tito Mboweni’s first major policy statement since returning to the cabinet almost halved the treasury’s growth forecast while predicting a steady increase in debt and borrowing that may attract unwelcome interest from ratings agencies.

Finance minister Tito Mboweni’s first major policy statement since returning to the cabinet almost halved the treasury’s growth forecast while predicting a steady increase in debt and borrowing that may attract unwelcome interest from ratings agencies.

In an echo of President Cyril Ramaphosa earlier this year‚ Mboweni also tried to strike an optimistic tone‚ even as he acknowledged the grim economic reality‚ saying the statement was “built on a strong conviction that SA can be renewed”. He stood his ground on fiscal discipline‚ maintaining the expenditure ceiling and providing no extra funding for unbudgeted public sector wage increases.

In a revision that puts the government in line with the Reserve Bank’s forecast‚ the state now expects the economy to grow 0.7% in 2018‚ compared with the 1.5% prediction that was presented by former finance minister Malusi Gigaba in February.

Ramaphosa’s widely optimistic 3% for the current year will not materialise anytime soon‚ with GDP growth expected to reach 2.3% in 2021. This is also far from the 5.4% growth that the government’s National Development Plan says is needed to reduce an unemployment rate of just more than 27%. A rate that Mboweni‚ who replaced Nhlanhla Nene just two weeks ago‚ described in the foreword to the medium-term budget policy statement (MTBPS) as “alarmingly high”.

The weak economy‚ tax revenue shortfalls and the depreciation of the rand are forecast to play havoc with the nation’s finances‚ with the budget deficit set to jump to 4% in the current fiscal year‚ up from a 3.6% projection in January. It will then rise to 4.2%‚ before narrowing slightly back to 4% in 2022. That means overall debt as a percentage of GDP will continue rising‚ reaching 59% at the end of 2022‚ from 50.7% in 2016/17.

The debt outlook will make it necessary for the government to have an “honest” conversation with ratings agencies‚ Mboweni said in a media briefing before his address to parliament. The “sweet spot” that the country should be aiming for is a ratio below 50%. The MTBPS was “being issued at a time of very low economic growth‚ so by definition that leads to lower revenue outcomes” and the treasury was “trying to do our best out of a very difficult situation”‚ he said.

Even the good news came with a health warning. An 11% increase in tax revenue collection in the first six months of the year was achieved on the back of a backlog in VAT refunds‚ creating “an overly optimistic view of revenue growth”.

Efforts to clear the backlog‚ together with the impact of the recession‚ will result in a R27bn revenue shortfall‚ relative to what was estimated in Gigaba’s budget. Increased VAT refunds will account for R20bn of the shortfall‚ with the rest due to lower tax receipts. The situation will improve only marginally to R24.7bn in 2019/20.

Mark Kingon‚ the acting commissioner of the SA Revenue Service (Sars)‚ sidestepped questions about whether this was due to a deliberate rate strategy by suspended commissioner Tom Moyane to artificially boost performance. But he conceded that cash flow management at the institution‚ which is the subject of a commission of inquiry that has detailed allegations of maladministration‚ had evolved to a point that he was “uncomfortable with”.

The government will not allocate additional money to fund above-inflation wage increases agreed with public sector unions this year‚ which were R30bn above budget‚ and departments will have to fund it themselves‚ which will probably mean less money for services and investment. Higher wages‚ rather than the hiring of new workers‚ accounted for about 85% in the wage bill‚ Mboweni said.