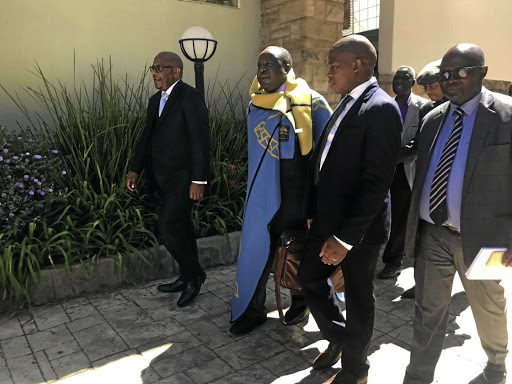 Finance minister Tito Mboweni is escorted by officials in Maseru, where he addressed the Lesotho Institute of Accountants which had invited him before he was appointed minister.
Image: RAPELANG RADEBE

Finance minister Tito Mboweni has labelled state capture as one of the "greatest heists of our times".

Mboweni was speaking at the Lesotho Institute of Accountants in Maseru yesterday. During his address, the minister also spoke of the need to protect the credibility of National Treasury.

Without mentioning anyone by name, Mboweni said an entrepreneur had worked out a scheme where they would first befriend a sitting president of the country and they would then use his name to cascade down the state institutions and end up corrupting a whole layer of people, stealing billions in the process.

This was the first time Mboweni, recently appointed minister of finance, spoke on any issue in public about state capture which has led to former president Jacob Zuma appointing the Zondo commission to investigate the extent of the problem.

Finance minister Tito Mboweni says the government will provide more details on how it plans to deal with the fallout from the VBS scandal when he ...
News
3 years ago

The commission of inquiry was established following several revelations that Zuma's friends, the Gupta family, were using his name to get business worth billions of rands from the SA government and state companies.

Mboweni, who now leads National Treasury, said that the institution cannot be compromised and would not employ people who would stage another heist against the country.

He also spoke about how connected citizens used to get undue tax breaks and that made stealing easy. He made an example of how these people would phone a minister of finance accusing the officials at South African Revenue Services of giving them troubles.

"The minister of finance will then phone the head of revenue and say why are you problematic... leave Mr Mahommed alone."

While there's nothing to fear from the deployment of Mboweni, the priority should be SA, not the ANC
Opinion
3 years ago

Mboweni said these attitudes were dangerous and the revenue service needed to be credible.

He is a proud alumni of the University of Lesotho, where he earned an honours degree in economics and politics. He was invited to Lesotho before his appointment as finance minister.

Mboweni also said he had to be reminded by his officials that before he left the South African soil for any trip, he must get the president's permission.

"The problem is that you have not read your induction documents as yet. One of the rules is that you should be given the permission to travel outside the borders of SA.

"I said, it's precisely for that I don't like this [SA/Lesotho] border because it does not make sense to me," he said.