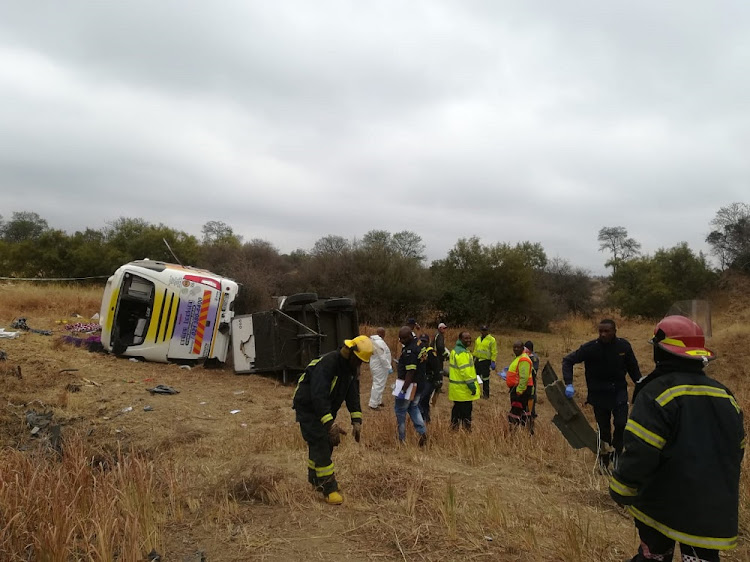 The scene of a deadly bus crash in Polokwane which claimed the lives of nine people.
Image: Supplied by SAPS

The driver involved in a tragic bus accident on the N1 in Limpopo‚ which claimed the lives of nine passengers‚ will remain behind bars‚ police said on Wednesday.

He appeared in court on Tuesday after he was caught trying to flee the country over the long weekend. Colonel Moatshe Ngoepe named the man as George Themba – aged 41. He is from Zimbabwe. Ngoepe said Themba appeared before the Polokwane Magistrate’s Court‚ where he was charged with nine counts of culpable homicide and another charge of reckless driving.

“He was denied bail and his cases were postponed to 2 October 2018 for further police investigations‚” Ngoepe said.

The driver was arrested while trying to cross the border into Zimbabwe after he had been discharged from hospital‚ said Colonel Moatshe Ngoepe.
News
3 years ago

“It is alleged that the bus was travelling from the direction of Polokwane towards Gauteng province when the driver lost control and it overturned. The bus was carrying 61 occupants‚ including the driver and the crew. Nine out of 61 were certified dead at the scene. The 52 other injured people including Themba were taken to different hospitals for medical treatment‚” Ngoepe said.

“As the process of intensive investigations by the police was unfolding‚ especially on the possible cause of that accident‚ he disappeared following his discharge from hospital and fled towards the Beit Bridge port of entry. The police were then tipped off‚ they swiftly responded and subsequently‚ the driver was caught hidden inside the goods trailer‚ trying to illegally cross the border to Zimbabwe‚” he added.