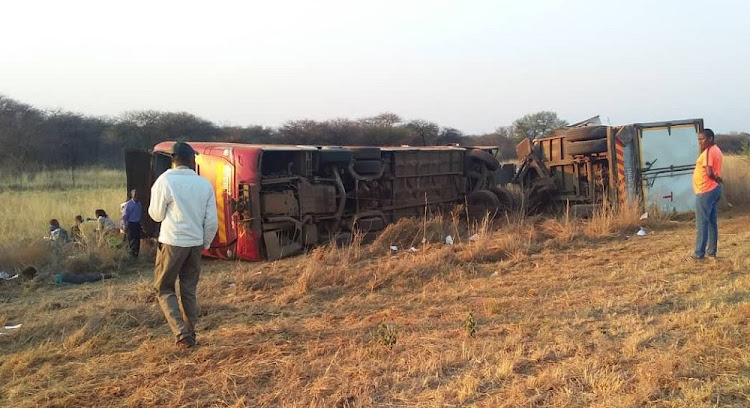 11 dead as bus overturns on N1 near Mookgopong.
Image: SAPS

A total of 11 people died in a bus crash on the N1 in Mookgopong near Modimolle on Monday morning‚ Limpopo police.

"It is alleged that the bus was travelling from Gauteng Province towards Polokwane in the early hours of today on Monday with 55 passengers and five drivers when it lost control and overturned. During this accident‚ 11 out of 60 where certified dead at the scene‚ all the drivers and other passengers sustained serious injuries and were taken to various hospitals for medical treatment‚" said Colonel Moatshe Ngoepe.

The bus was believed to have been bound for Zambia.

KwaZulu-Natal MEC for Transport Mxolisi Kaunda says that an investigation into a fatal bus crash in Zululand on Saturday will be expedited.
News
3 years ago

Ngoepe said it was unclear what had led to the driver losing control.

Five charges of culpable homicide were being investigated.

The Limpopo Department of Transport had earlier this morning announced the closure of the road.

Shortly before midday‚ the department announced that the bus had since been removed and the road had been reopened.