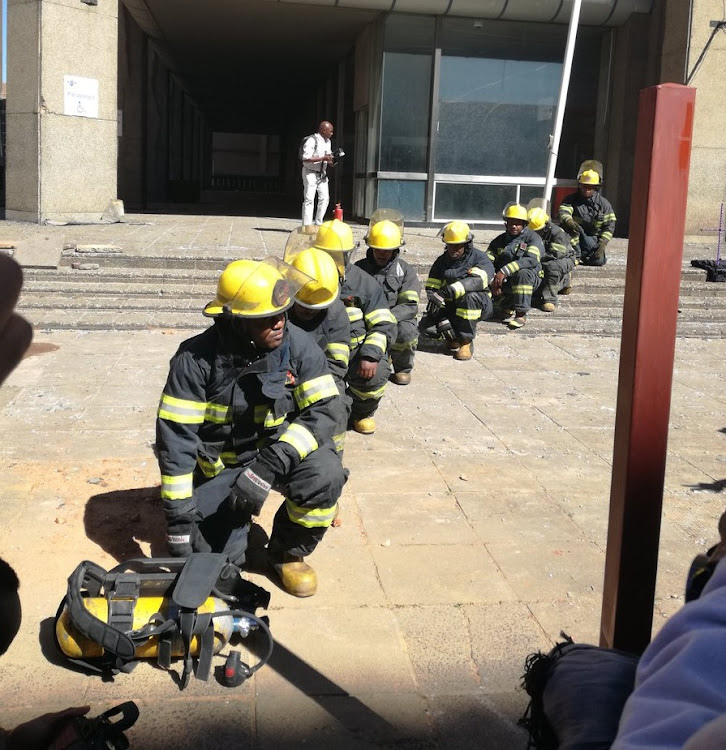 Firefighters honour their colleagues who died when a Gauteng government building caught fire in Johannesburg CBD.
Image: City of Johannesburg/Twitter

Fifteen firefighters in uniform made a guard of honour around three black crosses trimmed with purple ribbon in front of the Bank of Lisbon building where three firefighters lost their lives in a deadly blaze.

In the middle, a small piece of silver and yellow foil was pinned down with rocks on the spot where one firefighter fell to his death on Wednesday last week.

Next to the guard of honour, members of the Johannesburg Emergency Services broke into song.

Wreaths lay on the pavement of Pixley Seme Street in Johannesburg where a fire broke out at the 24-storey building that housed three government departments as Simphiwe Morokana, Mduduzi Ndlovu and Khathutshelo Muedi are being remembered today.

Relatives of the firefighters who perished while putting out a fire inside a Johannesburg building poured their hearts.
News
3 years ago

The deadly fire that engulfed a government building in Johannesburg will now be subject to an investigation.
News
3 years ago

Fire in one of the government buildings in Jhb CBD has since spread to lower levels through ducts filled with paper and boxes.
News
3 years ago
Next Article