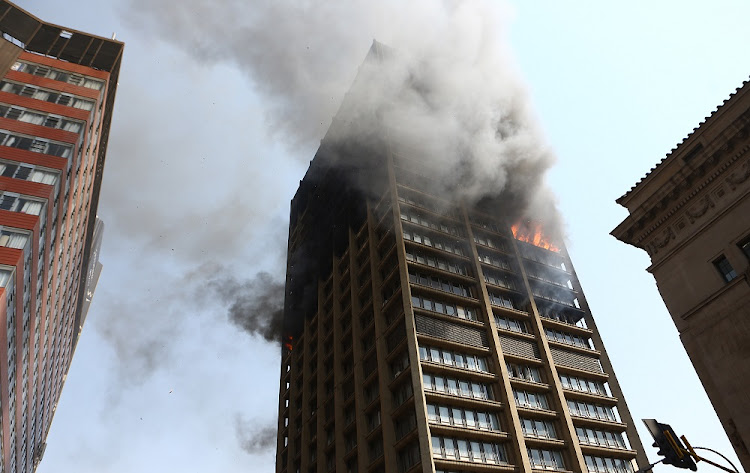 Fire, which resulted in the death of three firefighters, continue to ravage the government building in the Johannesburg city centre.
Image: Masi Losi

The fire that engulfed the 24-storey building which houses three Gauteng provincial departments in the Johannesburg CBD on Wednesday, killing three firefighters, was an accident waiting to happen. This is according Johanessburg mayor Herman Mashaba.

Mashaba was speaking at Milpark Hospital on Thursday where he had visited firefighters who were injured in the deadly fire at Pixley ka Isaka Seme Street.

Eight firefighters had been admitted to the hospital for smoke inhalation and burn injuries. Mashaba said only four firefighters were still in hospital and that they were all out of danger.

A visibly angry Mashaba said he had been raising concerns about safety in the City since 2016.

"What concerns me is the state of the City. What is disappointing is that government buildings are also not compliant. We need to act with pace to make sure we bring back the rule of law. For me, it was an accident waiting to happen," he said.

Mashaba said there were still dozens of buildings in the City that were safety hazards.

"Most fires that are happening in our City are due to recklessness. For as long as I am mayor, this incident is going to expedite my resolve. We are going to knock down buildings that do not comply [with safety standards]," he said.

The streets surrounding the building where a fatal fire broke out on Wednesday are set to remain closed.
News
3 years ago

An employee in the building said he did not take the  warning that the building was on fire seriously until he began to see the fire.
News
3 years ago

“They were sent to their deaths.” This was the consensus by former city fire officers.
News
3 years ago

JMPD Safety and City of Joburg EMS personnel are on the scene.
News
3 years ago
Next Article