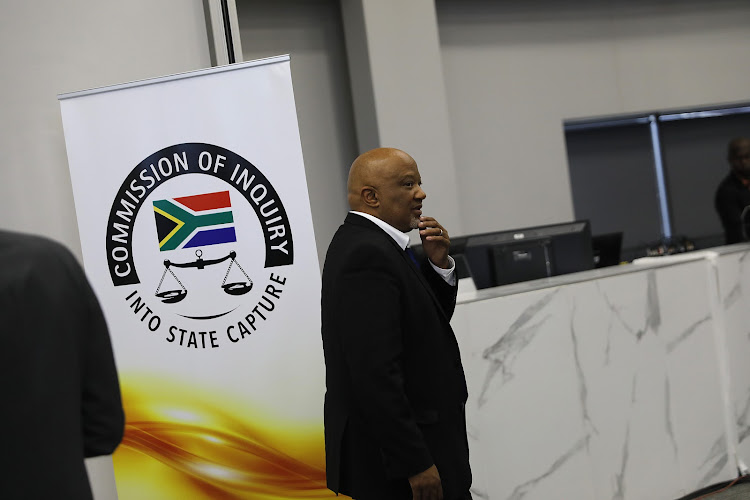 .Former deputy finance minister Mcebisi Jonas faces tough questions to determine whether it is true that the Gupta family wanted to bribe him to accept an offer to become finance minister, at the Zondo commission of inquiry investigating state capture.
Image: ALON SKUY

Former Deputy Minister Mcebisi Jonas has described how a Gupta brother told him that the family was “in control of everything” and then President Jacob Zuma would do anything they told him to.

“He said you must understand that we are in control, of everything. The National Prosecuting Authority, the Hawks, the National Intelligence Agency and the old man will do anything that we tell him to do”, Jonas testified this morning.

He also revealed that this Gupta brother, who he says was either Ajay or Rajesh, threatened to kill him if he disclosed that the family had met with him, and tried to bribe him to take the Finance Minister position.

This threat was made within earshot of Zuma’s son Duduzane and controversial arms Deal advisor Fana Hlongwane, Jonas said.

Crucially, however, he has indicated that he is not completely certain about the identity of the Gupta brother who made this bribe offer in October 2015 – months before then President Jacob Zuma’s shock removal of finance minister Nhlanhla Nene.

Ajay Gupta has denied in court papers that he was present at this meeting, and claims he has cellphone and other evidence to prove that he was not in Saxonwold at the time that it took place. Jonas’ apparent uncertainty over the identity of the Gupta brother he allegedly spoke to may prove to be significant in the criminal prosecution of the Gupta family over the alleged bribe.

Jonas has revealed that he chose not to report this alleged corruption to the Hawks, because he believed the unit was “seriously compromised”.

In his testimony, Jonas described how a Gupta brother had told him during the October 2015 that “they” had gathered intelligence on him, and his friends and advisors.

“Ajay Gupta demanded me to put money in their companies‚” Maseko said.
News
3 years ago

“I asked him directly what was the purpose of the meeting. Mr Gupta said the old man, referring to the President, seemed to like me and that they have called me to check me out and to see “whether you can work with us”.

“He also said that the President is going to fire Nene because he could not work with them.”

Jonas said he made it clear he was “not interested in becoming the minister of finance”. He said Duduzane and Hlongwane were “in the room, but just kept quiet, like they don’t exist”.

The Gupta brother then said “emphatically that I must become the minister of finance, because this is what we want, but I would have to work with them”.

“If I worked with them, I could become very rich and they could offer me six hundred million”.

He said the Gupta brother claimed that the family “worked closely with (former public enterprises minister) Lynne Brown and (former Eskom CEO) Brian Molefe, and as a result they were protected”.

“He said Mr Molefe is very safe, and his career path is very clear, and that nobody would touch him, and I would be safe too.”