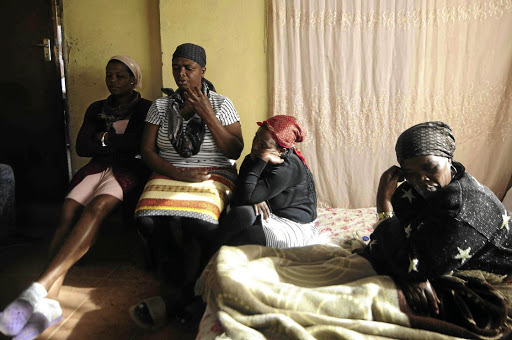 The family of Piet Ntsanwisi who died at Baragwanath Hospital in Soweto after allegedly being attacked with a sharp object by a mentally ill patient two weeks ago.
Image: Thulani Mbele

This is according to psychiatric nurse and Young Nurses Indaba Trade Union president Lerato Madumo-Gova who spoke to Sowetan following the death of another psychiatric patient in the province.

A 38-year-old man died at the Thelle Mogoerane Hospital in Vosloorus, Ekurhuleni, after falling from the smoking area room of the hospital to the lower ground floor.

The patient had apparently gone on a rampage, damaging the silicone bars around the smoking area when he fell.

Yesterday, Madumo-Gova said most units were high risk because of the shortage of staff and keeping patients in areas which are not conducive.

"All these things are a ticking time bomb that is going to explode at any time."

Nicole Breen of the South African Federation of Mental Health said the situation at mental wards was concerning.

As Health Minister Aaron Motsoaledi on Tuesday moved to assure the public that the government health services were not falling apart‚ a report ...
News
3 years ago

"Another factor rendering hospitals unsafe is poor infrastructure. Reports indicate that the patient at Thelle Mogoerane Hospital fell to his death after breaking open burglar bars. If the infrastructure was adequate, the patient would never have been able to do so and would not have lost his life."

Breen said security was not only about employing security guards, but adequately trained staff was also important.

". issues surrounding assault of patients, or patients destroying property in a manner . fatal to them should simply not happen within the walls of a hospital," Breen said.

President for the SA Society of Psychiatrists Prof Bernard Janse van Rensburg said the province had a shortage of psychiatric beds.

Shadow MEC for health Jack Bloom said he had previously warned that psychiatric facilities were not properly secured.

Sowetan reported two weeks ago that Piet Ntsanwisi, 59, died from head injuries after he was allegedly attacked by a psychiatric patient inside a ward. His family accused the hospital of negligence.

It also came out during health MEC Dr Gwen Ramokgopa's response to questions posed by Bloom in the legislature that eight staff members at the Tembisa Hospital had been assaulted by psychiatric patients since January last year while police were investigating the death of one patient.

Thelle Mogoerane Hospital CEO Dr Nomonde Mqhayi-Mbambo said they had never experienced an incident of this kind before. "We are taken aback by this incident. It is the first of its kind; we have never had a case of a patient falling from our wards. We take each death of a patient in our facilities in a serious light."

She said they would conduct a thorough investigation into the circumstances that might have led to the patient damaging the burglar bar.

Gauteng health spokesman Lesemang Matuka said facilities were managed well but incidents occurred due to the condition of some patients.

"Security assessments are being done at facilities and where there are gaps necessary measurers will be taken."