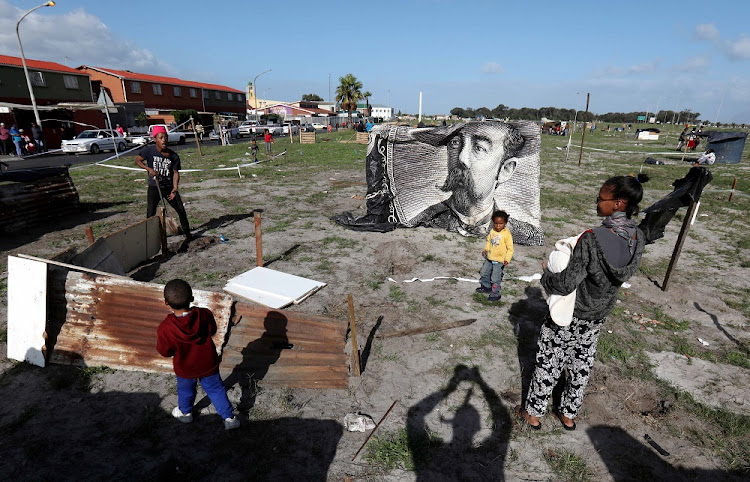 People of Parkwood near M5 camp out to keep an eye on their piece of land they marked out to build makeshift structures near the M5.
Image: Esa Alexander

Plots have been marked off with duct tape and rope on a vacant piece of land in Parkwood‚ Cape Town.

The land grab began on Saturday and escalated into violent clashes with police after roads were allegedly blocked by protesters in the area.

“I do not condone the action of blocking the roads but I saw their living conditions and I understand their frustrations‚” said Madikizela.

“I’ve pleaded with people not to stay here [on the vacant land]‚ as opportunists who don’t deserve a house might pitch up and take advantage of the situation. We must find a way to speed up the process and find a lasting situation for the people of Parkwood.”

But land-grabbers say they will not leave the area. Nicole Davis said she was living with eight adults and 10 children in a small house in Parkwood. The cramped living conditions were what drove her to set up a tent next to the M5.

“I don’t think anyone will be moving until there is proof our memorandum is through and we will get houses. If they throw us off we will just be back and building again‚” said Davis.

Said Adams: “My feeling is that these people are going nowhere. If Madikizela wants us off this ground he must come and do it his damn self.”

A land-grabber who didn’t want to be named said she has been waiting for 12 years for a house and pays R3‚000 a month for her small flat in Parkwood.

“My husband is the only one who works‚ we can’t afford it any longer‚” said the woman while attempting to set up a two-man tent on the dusty land.

Police are present in the area as land-grabbers continue to set up temporary structures.