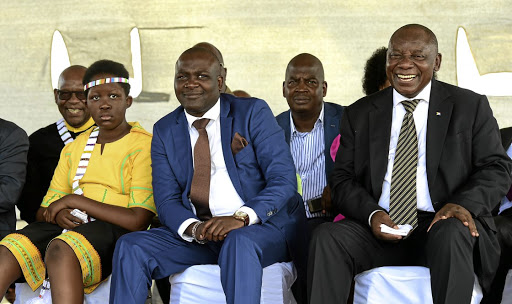 The Balobedu Rain Queen elect, Masalanabo Modjadji, has called Saturday's rainfall in the Modjadji area after her affirmation a confirmation of a new dawn for her people.

Speaking through her guardian, Dr Mathole Motshekga, Masalanabo, 13, said: "There was no better confirmation of the new dawn than witnessing the rainfall."

She attributed the rainfall to a group of Balobedu women who performed and sang a rain-making song at the stadium. The song is the highest appeal to God and ancestors.

Masalanabo made her first public appearance on Saturday at Mokwakwaila Stadium outside Modjadjiskloof in Limpopo since the death of her mother, Rain Queen Makobo Modjadji, in 2005.

This was after former president Jacob Zuma declared the recognition of the Balobedu queenship in 2016 following the recommendations of the Tolo Commission. The queenship was discontinued by the apartheid regime in 1972.

Regent Mpapatla Modjadji called on the people of Bolobedu to be united.

"All of us should work together to make this queenship a great one. We should make a brilliant foundation for Masalanabo [so] that in few years to come she will be able to build on it. We also want our language to be taught in school in order to preserve our culture and identity," he said.

President Cyril Ramaphosa said: "Our people used to live with each other in peace until colonialists came and implemented their divide and rule policy.

"This is a celebration of a unique royal leadership with a rich history that dates back over 400 years ," he said.

Ramaphosa told the crowd that Masalanabo would be installed as Rain Queen Modjadji 7th after she has graduated though the Lobedu custom.

"This is a true historic milestone that Mama Winnie Madikizela-Mandela would have been proud of. This is the first and only queenship in the country and on the continent," he said.

"We have heard you and those entrusted with such responsibilities will make it happen and will do it properly," he said.

"Today the Balobedu queenship is on the same recognition level with the Zulu, Venda and Xhosa kingship."

Zuma played down his role in recognising the queenship of Balobedu.

"I happened to be the president at the time when the status of the community was concluded. And, of course, I was so happy because I believe in our tradition and culture," he said at a gala dinner at Shilo Lodge outside Modjadjiskloof.