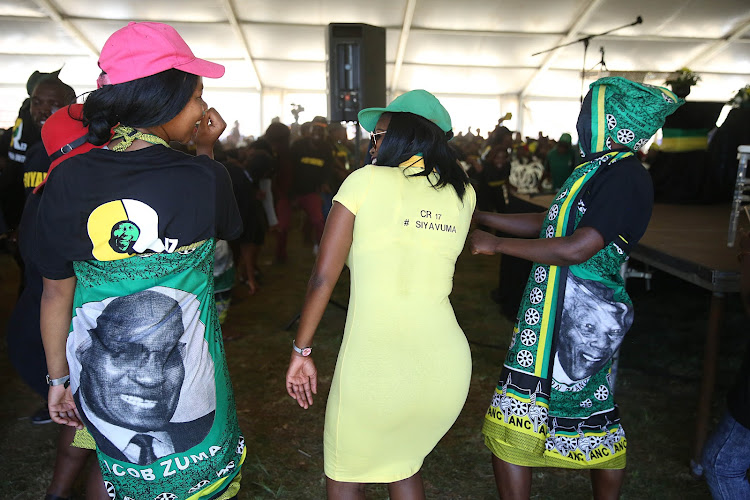 Presidential hopeful Cyril Ramaphosa kicked off his final campaign in KwaZulu-Natal on Sunday by paying homage to King Goodwill Zwelithini where he presented him with one of his own African long-horned Watusi cattle from his farm.

The king in turn presented a beaming Ramaphosa with a Nguni hide battle shield.

The media was not allowed at eNyokeni Royal Palace in Nongoma‚ north of KwaZulu-Natal where Ramaphosa’s visit to the Zulu monarch coincided with the visit of the Ebuhleni faction of the Shembe Baptist Church for the denomination’s annual royal pilgrimage.

It is understood‚ but not confirmed by Ramaphosa campaigners‚ that he got blessings from the Ebuhleni leader Mduduzi “Nyazilwezulu” Shembe who prayed for him to ascend to the ANC presidency in May this year.

The Shembe clergy had also urged Ramaphosa to revisit the church before the December national conference saying they had also prayed for President Jacob Zuma’s presidential ambitions which came to fruition a decade ago.

CR17 spokesman Sithembiso Mshengu confirmed that Ramaphosa visited the king but said the Shembe church’s presence was just a coincidence.

“The deputy president is here in Nongoma and Jozini to address send-off rallies. Yes he is currently meeting with the His Majesty and is accompanied by Mike Mabuyakhulu‚” he said.

Cyril Ramaphosa has implored law enforcement agencies to investigate and charge all those implicated in corruption.
News
4 years ago

This final push in KwaZulu-Natal also coincides with the last day of branch general meetings and will see Ramaphosa addressing a rally in KwaGqikazi Stadium in Nongoma and at Ezibukweni Sportsfield in Jozini where he will be accompanied by former KZN premier and ousted ANC provincial chair Senzo Mchunu. Thousands of his supporters filled KwaGqikazi stadium in searing heat awaiting for his arrival.

By 12.20pm‚ Ramaphosa was yet to show up but various local artists kept the perspiring crowds entertained amid a huge contingency of SAPS personnel.

People were bussed in from as far as Pongola‚ Richards Bay ‚ Vryheid and Mpumalanga province were he addressed a rally on Saturday.

“We chose the two regions to hold rallies in because this is where our candidates did well in the nominations by the BGMs (branch general meetings). We did well here in Abaqulusi and in the Far North region and it is befitting that the two regions convene a send-off rally for him‚” said Mshengu.

He said Ramaphosa’s unity message was resonating with every structure in the ANC and that he has been consistent in his message.

He denied widespread reports that Ramaphosa has met with his arch-rival Nkosazana Dlamini-Zuma to broker a deal in case one of them does not make it post the conference.