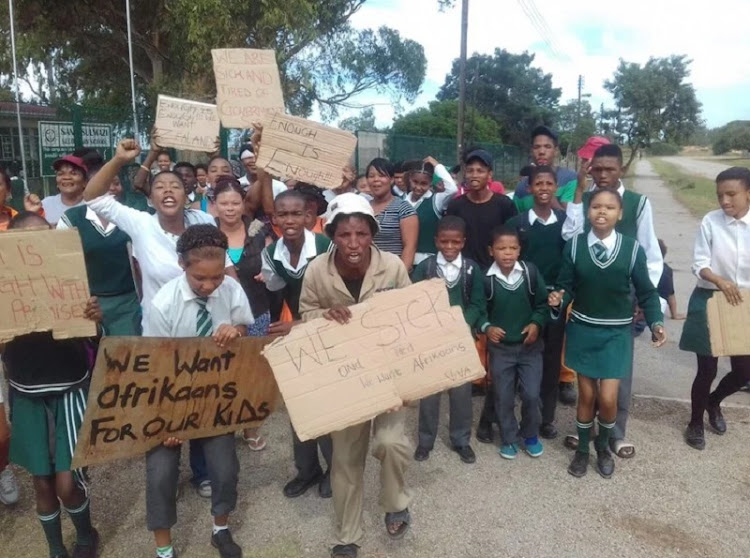 Parents, learners and community members are threatening to close Sandisulwazi Secondary School in Paterson, Eastern Cape, if Afrikaans, the mother tongue of numerous learners at the school, is not taught. Photo: Joseph Chirume

Angry parents are threatening to shut down the Sandisulwazi Secondary School in Paterson‚ Eastern Cape‚ over demands that their children are provided with a teacher to take the Afrikaans class.

Sandisulwazi has nine teachers‚ eight Xhosa-speaking and one English-speaking. There are 303 learners at the school‚ 65 who speak Afrikaans as a first language.

On Monday‚ about 80 disgruntled parents‚ learners and community members‚ protested at the school‚ which is about 75km from Port Elizabeth. Police arrived and the principal locked the gates to keep the protesters outside of the school grounds. The protest was peaceful with demonstrators singing and waving placards.

Isaac van Louw‚ a member of the School Governing Board (SGB)‚ said‚ “There is no Afrikaans teacher since last May. We have held talks with the Department of Education on six occasions. Sadly‚ the talks have yielded nothing. It’s only promises and promises.”

He said the parents were going “to close the school so as to create an equal playing field for all learners”.

SGB chairman Alfred Salters said Afrikaans-speaking learners who wrote Matric last year had failed because there had been no Afrikaans teacher.

Youth have no reason to snub tertiary education

When I was a teenager, my late father shared with me why he hadn't gone through school. He said his parents couldn't afford to buy school uniform for ...
Opinion
3 years ago

“We had a total of 121 Afrikaans-speaking children attending the school last year‚ but at present we are left with 65.”

Salters said people had sent their kids to schools in Port Elizabeth and Uitenhage‚ but many parents could afford the boarding fees at those schools.

Irene Billet‚ a parent‚ said‚ “We want the former principal back because he doubled as an Afrikaans teacher. Since he left last May‚ the school has been dogged by mismanagement and victimisation of the Afrikaans-speaking learners.”

Grade 12 learner Aloma Gouza said‚ “We are only four Afrikaans-speaking learners in my grade. We sit in an empty classroom when it is time for Afrikaans lesson. Our education system demands that learners have to pass their mother tongue language in order to proceed. I don’t see this happening.”

Ridley Cupino‚ who is repeating Grade 11 after he failed Afrikaans‚ said‚ “I am very angry. It is discouraging that the conditions that made me fail last year are still the same. We play rugby when it’s time for Afrikaans lessons”.

Eastern Cape Department of Education spokesperson Mali Mtima said the department was aware of the situation.

“We are talking with some retired educators to come out of retirement and assist us. We had the same problem with Sotho and Agriculture‚ but it was solved. We have students who are training in the Afrikaans language at colleges but they are not yet qualified to teach.

“We are not giving parents and learners at Sandisulwazi School a timeline but we are hoping the problem will be resolved. We are also appealing to parents not to close the school.”

Malusi Gigaba is looking for ideas on how to find the money to enact free tertiary education for the poor.
News
3 years ago

Gauteng education MEC Panyaza Lesufi is not taking the temperate approach of Basic Education Minister Angie Motshekga towards the implementation of ...
News
3 years ago

The Gauteng department of education wants to change the resignation of the principal of Reiger Park High School into a dismissal.
News
3 years ago

I would like to applaud the government for providing learners with meals through the national school nutrition programme. This programme is ...
Opinion
3 years ago
Next Article