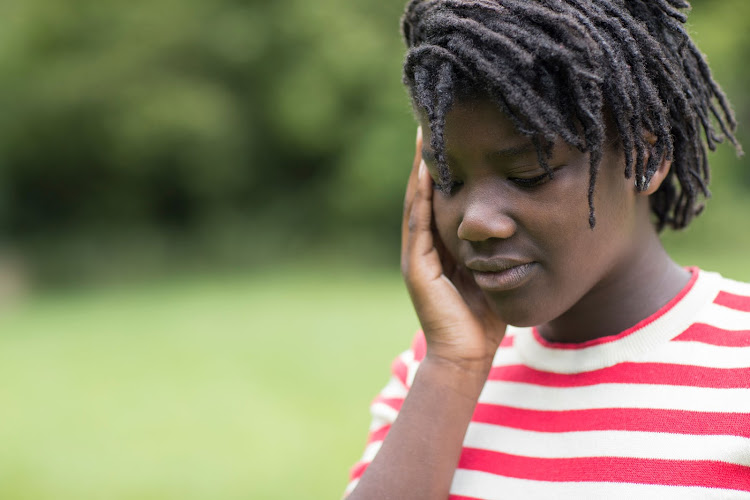 Imagine a young child in primary school‚ standing in the corner of the playground‚ watching her peers running around and laughing loudly as they play without a care in the world - but instead of it bringing her joy‚ it brings her misery.

She cannot join them. Not because she has been bullied or has troubles at home‚ not because she is distracted by the struggles she may have with school work; but simply because she feels undeserving of having a friend or sharing in this childhood pleasure.

This is how Lora‚ 25‚ recalls her bouts against childhood depression. She said that teachers and other pupils labelled her a "loner who didn't make friends easily".

"I wanted friends‚ but I didn't want to socialise. I would watch children playing and they would call me to join them but I wouldn't go. I just didn't fit in with them‚" said Lora.

One day as she walked back home with a group of other school children‚ the urge to end her life was triggered. She was 11.

"They kept making jokes about each other and one boy happened to make a joke about me. His jokes hurt me so much‚ but now I cannot even remember what he said. I now know that there were no malicious intent there but that day I got home and took all of my grandfather's pills to my room with me. I wanted to drink them all. I didn't want to go to school to face him the next day and I even believed that his joke was true and I was all those things he said I was‚" Lora said.

An eight-year-old girl who hanged herself at a children’s home in Durban on Sunday was a "very troubled child".
News
3 years ago

Luckily‚ the helper at home found her just in the nick of time.

In high school‚ she again tried to commit suicide. The pressures of high school‚ mixed with her teenage hormones‚ anxiety and depression got the better of her.

She tried to hang herself on the curtain rail using her school tie. Again‚ her helper found her.

According to the Institute of Race Relations‚ South Africa has a higher rate of suicide mortality compared to other African countries.

"More recently‚ we have seen reports…of children as young as six-years-old who have committed suicide. [In January]‚ there were reports of an 8 year old girl who died from suicide in Durban‚" the group said.

TimesLIVE reported that the girl hanged herself at the Aryan Benevolent Children's Home.

Last year‚ at least two primary school children‚ aged six and nine‚ were found dead in what appeared to be acts of suicide in Limpopo and Mpumalanga. One was found dead after reportedly hanging himself in the school toilet while the other was believed to have hanged himself on the school swing.

Sadag said hanging was the most frequently employed method of suicide among youngsters in South Africa‚ followed by shooting‚ gas inhalation and burning.

"Risk factors for suicide among the young include the presence of mental illness – especially depression‚ conduct disorder‚ alcohol and drug abuse; previous suicide attempts; and the availability of firearms in the home. In South Africa 60% of people who commit suicide are depressed‚" the group said.

Lora said that in her adult years she still struggled and has tried to find answers as to why she felt this way.

"It is frustrating not knowing what is wrong with you. You are just sad and you can't explain why. On the days of the 'bad lows’‚ waking up is the worst thing ever. You just have a feeling of emptiness‚ negativity and uselessness and‚ unlike a bad day‚ it doesn't wear off."

She has tried to commit suicide twice more since her teen years‚ with the last time being in October where she tried to slit her wrists just days after getting out of a mental illness clinic.

She was diagnosed with clinical depression and anxiety.

Lora explains how her mental illness led to her abusing substances.

"I became addicted to alcohol‚ codene and marijuana. I would drink to numb the pain‚" she said.

Now‚ the multimedia reporter is trying to pick up the pieces of her life‚ saying she recently stopped drinking her concoction of medication‚ which included mood stabilisers‚ anti-psychotics‚ anxiety and sleeping pills. She has also stopped drinking alcohol and taking codene‚ but admits to occasionally using marijuana.

"The medication helped a lot but at times I felt 'zombified'. I didn't want to go through life like that‚" she said.

Her faith in God has also been helping.

"I felt like I needed a higher power‚ something big to intervene but I had prayed and it wouldn't go away‚" she said.

Lora believed mental illnesses were difficult to deal with because not everyone understood what they actually meant.

"When you feel down and depressed and you just want to cry but you don't know why‚ people dismiss it as attention seeking. Depression is brushed off and not taken seriously and as a person going through it‚ it is hard because you can't explain your own feelings too. It's not just a bad day but it's a never ending cycle‚" she added.

Depression is not only a white man's condition