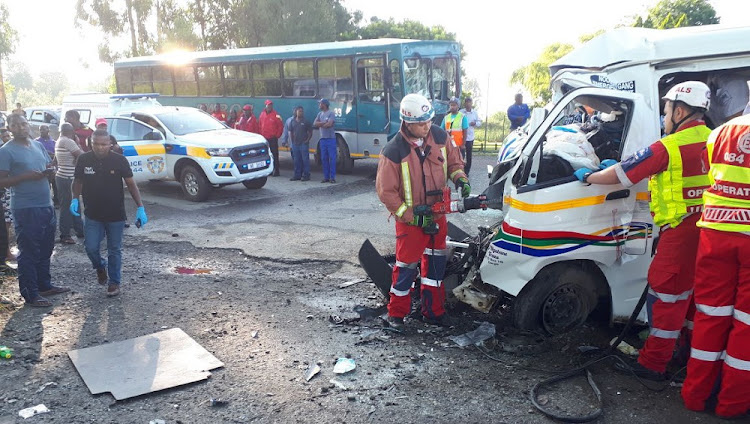 Four people were killed when a minibus taxi and a bus collided on Howick’s Main Road in the KwaZulu-Natal Midlands.
Image: ER24

Four people were killed when a minibus taxi and a bus collided on Howick’s Main Road in the KwaZulu-Natal Midlands on Thursday morning.

Netcare911 spokesman Shawn Herbst said that paramedics received a report of the crash shortly after 6am and raced to the scene.

They arrived to find that several occupants of the minibus were trapped in the vehicle.

“Paramedics attended to multiple patients‚ some of which were entrapped in the wreckage. Officers from the police’s search and rescue unit used the jaws of life to free occupants from the minibus taxi.”

Herbst said that four people‚ one of whom was the driver‚ were declared dead at the scene of the accident. “Multiple patients have been transported to various hospitals for further assessment and care‚” he added.

A year ago Clinton Morris was fighting for his life.
Good Life
4 years ago
Next Article