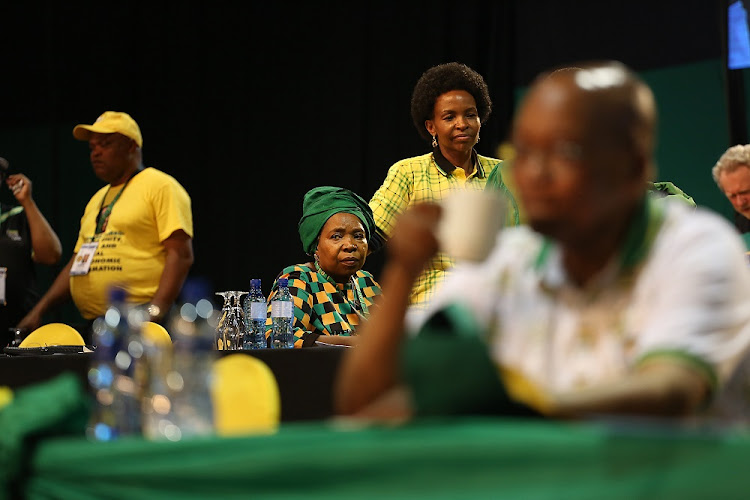 Nkosazana Dlamini-Zuma looks on in the background as the outgoing ANC President Jacob Zuma takes a sip from his cup at the 54th ANC Elective Conference at Nasrec, Johannesburg.
Image: Alon Skuy

The announcement of the new ANC Top Six has drawn massive reaction on Twitter.

Here are some of the interesting views expressed:

Fikile Mbalula‚ who was among those calling for Nkosazana Dlamini-Zuma to succeed President Jacob Zuma wrote: "The branches have spoken‚ case closed. I join thousands congratulating the new leadership."

EFF leader and former member of the ANC Julius Malema tweeted: "Nothing has really changed‚ the core of the corrupt premier league is at the centre of the organisation. The Guptas are still in charge and as a result it will be difficult to recall Zuma. Don't get easily excited over nothing but I'm happy the Zumas ate a humble pie…."

Former leader of the DA Helen Zille tweeted: "ANC divided 50:50. How will it function?"

Mzwanele Manyi‚ who is the head of ANN7‚ wrote: “I accept and congratulate the top 6 as announced. President Cyril Matamela Ramaphosa is our ANC president who I will fully support as my president. Amandla!!!"

University of Witwatersrand Vice-Chancellor‚ Adam Habib wrote: "Congratulations to Ramaphosa. It is a split leadership team but maybe that is for the better. For those who worry about Ramaphosa being paralysed‚ remember that he has both Mantashe and Mashatile‚ both of whom are politically astute. He has political support and should use it."

Cyril Ramaphosa is the new president of the African National Congress (ANC), it was announced on Monday.
News
3 years ago

Cyril Ramaphosa has been voted as the new president of the African National Congress (ANC). Other members of the ANC top 6: David Mabuza won the ...
News
3 years ago

Opposition parties were skeptical yet optimistic on Monday night after Cyril Ramaphosa was elected the new ANC president.
News
3 years ago
Next Article