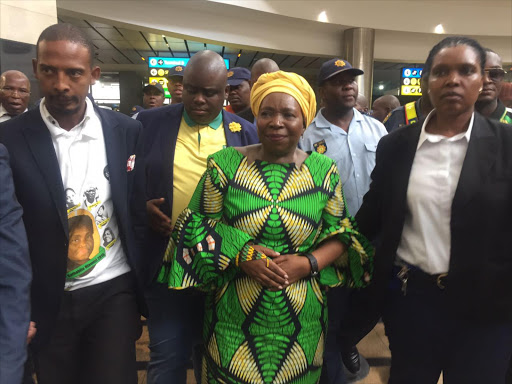 The ANC is likely to lose its parliamentary majority if it chooses Nkosazana Dlamini-Zuma as its leader at this month's elective conference‚ according to a poll.

A survey conducted by Ratepop‚ a technology-based research and polling company‚ focused on the consequences of the ANC’s leadership battle ahead of the national elections in 2019.

According to the survey‚ Ramaphosa remains the “overwhelming” popular choice among the ANC electorate‚ with the support of 58.9% of ANC voters compared to 16% for Dlamini-Zuma.

If Ramaphosa becomes president of the ANC‚ 81% of the party’s supporters said they would vote for the party in the 2019 national elections.

“With the ANC only having polled only approximately 54% in the 2016 Local Government Elections‚ the chances of the ANC maintaining its parliamentary majority with Nkosazana Dlamini-Zuma at the helm of the party‚ is substantially reduced and realistically unlikely at this point‚” the survey says.

ANC presidential hopeful Nkosazana Dlamini-Zuma told supporters at a party rally in Durban on Saturday that‚ win or lose‚ she's already a ...
News
4 years ago

Supporters of opposition parties were also polled on how they would vote in the 2019 elections if either Ramaphosa or Dlamini-Zuma were to be elected as president of the ruling party.

If Dlamini-Zuma becomes leader of the ANC‚ only 6.9% of the Democratic Alliance’s black voters will desert the party and vote for the ANC in 2019‚ the survey says.

“If Dlamini-Zuma becomes leader of the ANC‚ only 3.4% of the Economic Freedom Fighter’s’ Black voters will abandon the party and vote for the ANC in 2019.”

Should Ramaphosa become leader of the ANC‚ 50.9% of the Democratic Alliance’s black voters say they will vote for the ANC in 2019.