Eritrea has not acknowledged its troops crossed border 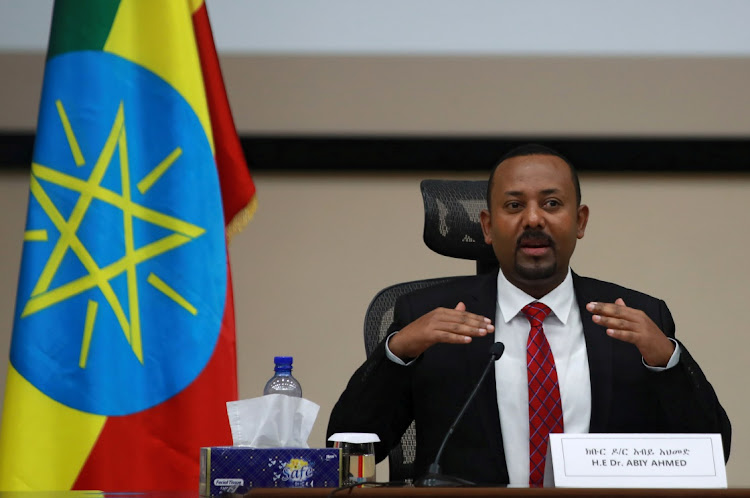 Eritrea has agreed to withdraw troops from Ethiopian territory along their mutual border, Ethiopia's prime minister said on Friday, under international pressure to address mounting reports of human rights abuses during months of conflict.

Prime Minister Abiy Ahmed, who acknowledged for the first time this week that Eritrean forces had crossed the border into Ethiopia's northern Tigray region during the fighting, said Ethiopia's military would take over guarding the border area.

"Eritrea has agreed to withdraw its forces out of the Ethiopian border," he said in a statement on Twitter during a trip to Eritrea's capital, Asmara, for talks with President Isaias Afwerki.

Eritrea's information minister, Yemane Gebremeskel, did not immediately respond to requests for comment. Eritrea's government has not acknowledged its troops are in Tigray.

U.S. Secretary of State Antony Blinken said this month he wanted Eritrean forces replaced in Tigray by forces that would respect human rights.

A U.S. official, speaking on condition of anonymity, told Reuters Senator Chris Coons had met Abiy last weekend and urged him to press for an Eritrean troop withdrawal. Coons was sent to Ethiopia on behalf of President Joe Biden because of growing U.S. concern about the situation.

Fighting erupted in Tigray in early November after forces loyal to the then-governing party there - the Tigray People's Liberation Front (TPLF) - attacked army bases across the region.

The Ethiopian government declared victory over the TPLF in late November but fighting has continued in some areas.

Abiy told parliament on Tuesday Eritrean troops had crossed the border into Tigray because they were concerned they would be attacked by TPLF forces, and that the Eritreans had promised to leave when Ethiopia's military was able to control the border.

He also acknowledged there had been atrocities such as rape during the conflict.

Asked about reports of rights abuses by Eritrean forces, Yemane said in text messages on Friday that it was "never in our military tradition to kill civilians" and that "sexual violence, rape etc are an abomination to Eritrean society."

Amnesty International accused Eritrean forces on Friday of killing hundreds of civilians in northern Ethiopia over 24 hours last year, an incident it ...
News
10 months ago

The violence in Tigray has killed thousands of people and forced hundreds of thousands from their homes in the mountainous region of about 5 million.

Abiy did not make clear on Friday whether any Eritrean troops not in the immediate border area would also withdraw.

Reuters journalists in Tigray this month saw hundreds of soldiers in Eritrean uniforms travelling in vehicles with Eritrean license plates in large towns and along the main road between the regional capital, Mekelle, and the city of Shire.

Dozens of civilians in Tigray told Reuters they had been victims of, or witnesses to, gang rapes and looting by Eritrean soldiers. Four had bullet wounds they said were from Eritrean attacks. Some said they had witnessed extrajudicial killings.

Reuters could not independently verify the accounts.

In his comments to Reuters earlier this month, Yemane said Eritrea had evidence that TPLF activists were “coaching” fake witnesses, but he did not share the evidence. He did not comment at the time on whether Eritrean troops were in Tigray.

The TPLF has long been an enemy of Eritrea and repeatedly fired rockets at Eritrea after the conflict began.

Abiy said on Tuesday his government had raised accusations of widespread looting and rights abuses by Eritrean soldiers in Tigray with Eritrea.

When Reuters visited Axum this month, the city, was silent and most shops were shuttered.

"The town is mourning. The Amnesty report was exactly right," one man told Reuters.

He added: "Don't put my name. They (the Eritreans) are still here, and they will kill me."

A dozen top UN officials called for a stop to indiscriminate and targeted attacks against civilians in Ethiopia's northern Tigray region, ...
News
9 months ago

A diabetic mother died as her daughter searched the capital of Ethiopia's northern Tigray region for insulin. Women
News
11 months ago

Scores of women have been raped in Ethiopia's northerly Tigray region, authorities have confirmed, in the chaotic aftermath of an armed conflict last ...
News
11 months ago
Next Article