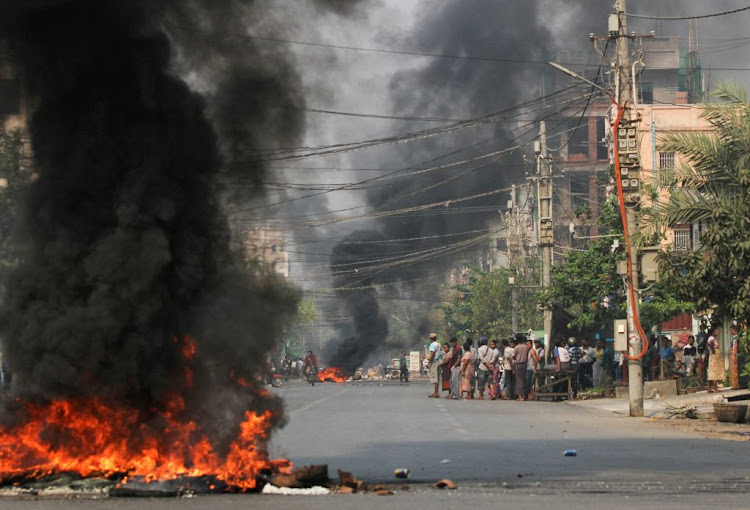 Tyres burn on a street as protests against the military coup continue, in Mandalay, Myanmar, on March 27 2021.
Image: REUTERS/Stringer

Myanmar's ethnic armed factions will not stand by and do nothing if the military junta's forces continue to kill protesters, the leader of one of the main armed groups said on Saturday.

At least 16 protesters were killed by security forces across Myanmar on Saturday, according to local media and witnesses, as the junta celebrated the annual Armed Forces Day.

“It isn’t for the protection of democracy as well, it’s how they harm democracy ...

“If they continue to shoot at protesters and bully the people, I think all the ethnic groups would not just stand by and do nothing.”

Facebook on Sunday deleted the main page of the Myanmar military under it standards prohibiting the incitement of violence, the company said, a day ...
News
2 months ago

Aung San Suu Kyi's fall from grace as a rights icon has dampened Western enthusiasm for her as Myanmar's leader, but governments will still press for ...
News
3 months ago

The RCSS, which operates near the Thai border, is one of several ethnic armed groups to have denounced the coup and vowed to stand with protesters. Myanmar's two dozen or so ethnic armed factions control vast swathes of the country.

Addressing a military parade earlier, junta leader Min Aung Hlaing said the army's job was to protect the people and promote democracy, reiterating his promise of a fresh election made after the army took power on February 1.

The junta says a November 8 ballot, won in a landslide by Aung San Suu Kyi's National League for Democracy (NLD), was rigged, forcing the military to take control.

The latest fatalities would bring the total death toll to more than 340 in the army's efforts to stamp out the widespread opposition to the coup.

Many protesters are calling for the formation of a federal army and Yawd Serk said he supported that.

“The ethnic armed groups now have a similar enemy and we need to join hands and hurt those that are hurting the people. We need to join together,” he said.