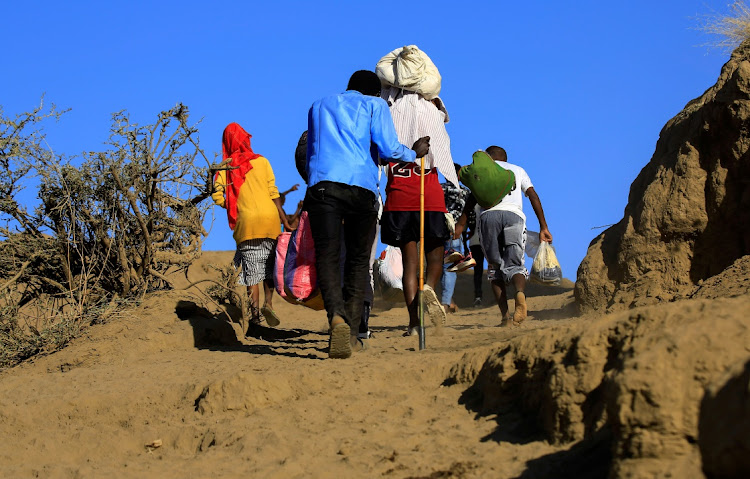 Ethiopians, who fled the ongoing fighting in Tigray region, carry their belongings after crossing the Setit River on the Sudan-Ethiopia border, in the eastern Kassala state, Sudan.
Image: MOHAMED NURELDIN ABDALLAH

About 2.2 million people have been displaced within Ethiopia's Tigray region since fighting erupted there in November with about half fleeing after their homes were burned down, a local government official said.

Gebremeskel Kassa, a senior official in the interim administration in Tigray appointed by the federal government, made the comments in an interview broadcast by state-run ETV's Tigriniya language channel late on Tuesday.

The figure given by the official was more than double a previous estimate for the number of people displaced of 950,000, which included 50,000 who had fled to neighbouring countries.

Ethiopia's federal government restricted access to Tigray after fighting began on Nov. 4 between its troops and the Tigray People's Liberation Front (TPLF), a political party that was governing the province. The government declared victory in late November though the TPLF has vowed to fight on.

Ethiopia offered a 10 million birr ($260,000) reward on Friday for information on the location of fugitive leaders of a rebellious force in northern ...
News
1 year ago

The conflict in Tigray has called into question whether Prime Minister Abiy Ahmed, who won the 2019 Nobel Peace Prize, can hold together fractious ethnic groups in the country.

An official from Ethiopia's National Disaster Risk Management Commission told Reuters on Wednesday that the figures cited by the administrator in Tigray were not official.

The commission's Mitiku Kassa said 110,000 people were displaced within Tigray and 1.8 million were in need of assessment, though he said the actual number of displaced was likely to be far higher than its current tally.

A U.N. refugee agency official also said on Tuesday that Ethiopians were still crossing into neighbouring Sudan from Tigray.

A spokeswoman for Abiy's office did not immediately respond to a request for comment on the report that refugees were continuing to cross into Sudan.

More than 56,000 people have now crossed into Sudan from Tigray since the conflict started, according to the U.N. refugee agency's latest data.

A Reuters cameraman, Kumerra Gemechu, was arrested in the Ethiopian capital Addis Ababa on Thursday and will be kept in custody for at least two ...
News
1 year ago

Gunmen killed more than 100 people in a dawn attack in the western Benishangul-Gumuz region of Ethiopia on Wednesday, the human rights commission ...
News
1 year ago