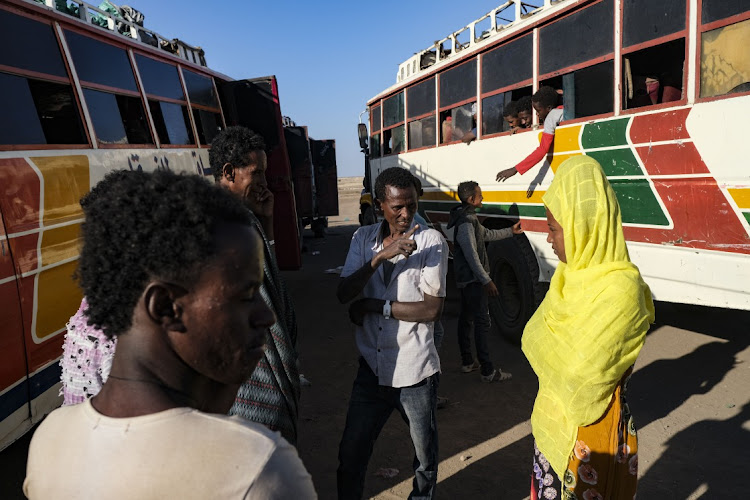 Refugees from the Tigray region of Ethiopia board buses to a Um Rakuba refugee camp after spending days to weeks at a UNHCR reception center located in the east Sudanese border village of Hamdayet on December 7, 2020 in Hamdayet, Sudan.
Image: Byron Smith/Getty Images

When Bangladeshi textile firm DBL set up shop in Ethiopia two years ago, the African nation was the garment industry's bright new frontier, boasting abundant cheap labour and a government keen to woo companies with tax breaks and cheap loans.

Last month, as fighting raged in the northern Tigray region, DBL's compound was rocked by an explosion that blasted out the factory's windows, radically altering its business calculus.

“All we could do was to pray out loud,” said Adbul Waseq, an official at the company, which makes clothes mainly for Swedish fashion giant H & and is one of at least three foreign garment makers to have suspended operations in Tigray.

“We could have died,” Waseq told Reuters.

For over a decade, Ethiopia has invested billions of dollars in infrastructure such as hydroelectric dams, railways, roads as well as industrial parks in an ambitious bid to transform the poor, mainly agrarian nation into a manufacturing powerhouse.

By 2017, it was the world's fastest growing economy.

A year later, Prime Minister Abiy Ahmed took office, pledging to loosen the state's grip on an economy with over 100 million people and liberalise sectors such as telecoms, fuelling something akin to glasnost-era headiness among investors.

But for two years Ethiopia has been pummelled by challenges: ethnic clashes, floods, locust swarms and coronavirus lockdowns.

Now, fighting which erupted on Nov. 4 between the army and forces loyal to Tigray's former ruling party, and fears it could signal a period of prolonged unrest, have served investors with a harsh reality cheque.

Any hesitation by investors could spell trouble as the country's manufacturing export push isn't yet generating enough foreign currency either to pay for all the country's imports or keep pace with rising debt service costs. Even before the pandemic, the International Monetary Fund (IMF) had warned that Ethiopia was at high risk of debt distress.

Abiy's government said that, amid the crises it's facing, Ethiopia was pushing ahead with reforms that will build the foundations for a modern economy.

Ethiopia is a relatively small textiles producer with exports in 2016 of just $94 million compared with $29 billion for Vietnam and $253 billion for China in the same year, World Bank trade data showed. Its top exports are agricultural, such as coffee, tea, spices, oil seeds, plants and flowers.

But Ethiopia's push into the textile industry over the past 10 years has been emblematic of its manufacturing ambitions.

“It seemed that the conflict was getting closer to the city, and our worry was that we wouldn't be able to leave,” Cristiano Frati, an electrician evacuated from a factory run by Italian hosiery chain Caledonia, told an Italian newspaper.

Caledonia said on Nov. 13 it had suspended operations at the plant, which employs about 2,000 people, due to the conflict. It has declined to say further.

DBL, meanwhile, has flown its foreign staff out of Ethiopia.

“Everything has become uncertain,” its MD M.A. Jabbar said. “When will the war end?”

Another foreign company, Velocity Apparelz Companies — a supplier to H & and Children's Place — has also temporarily shut down, a company official told Reuters.

H & said it was “very concerned” and was closely monitoring the situation.

Ethiopia and the United Nations agreed on Wednesday to channel desperately-needed humanitarian aid to the northern region of Tigray, where a month of ...
News
1 year ago

“We have three suppliers in Tigray, and the production there has come to a halt,” the company told Reuters, emphasising that it would continue to source from Ethiopia where it has about 10 suppliers in total.

Indochina Apparel, a Chinese firm that supplies Levi Strauss & Co, said its operations in the Hawassa industrial park in the south of the country were unaffected.

Levi Strauss said it was monitoring the situation and confirmed there had been no affect on its supply chain so far.

'NOT A PRETTY PICTURE'

Ethiopia's apparel sector was struggling even before the fighting in Tigray because of the economic fallout from the Covid-19 pandemic. Some facilities did not survive the collapse in orders while others slashed wages or laid off staff.

The malaise has not been limited to the garment sector.

“Ethiopia is not a pretty picture right now,” he said.

Like most sources contacted by Reuters, the consultant asked not to be named, fearing a backlash from government authorities.

Abiy's efforts to ease a repressive political climate had already uncorked ethnic clashes before the war in Tigray. Violence in other parts of the country which intensified in 2019 had disrupted projects, notably in agriculture.

“The fighting started about the time we were going to start planting,” said the head of an agri-industry project that was forced to delay its investment last year.

Swedish furniture giant IKEA opened a purchasing office in Ethiopia last year. However, it closed it down in September after shelving plans to source from the country due to the political and social situation, Covid-19 and changes to the cotton market in Africa, the company told Reuters.

Meanwhile, Coca-Cola Beverages Africa, a bottling partner of the Coca-Cola Company, told Reuters that the fighting in Tigray, which accounts for about 20% of its sales volumes in Ethiopia, had halted business there.

That comes on the heels of delays in the construction of two new bottling plants — part of a $300 million five-year investment plan announced last year — due to the pandemic and an excise tax increase.

With the fall of Mekelle at the end of last month, Abiy declared victory over Tigray's former ruling party (TPLF).

“The swift, decisive, and determined completion of the active phase of the military operation means any lingering concerns about political uncertainty by the investment community will be effectively settled,” Abiy's adviser Mamo said.

The TPLF has vowed to fight on.

For the government, there is little margin for error. Ethiopia's external debt has ballooned five-fold over the past decade as the government borrowed heavily — notably from China — to pay for infrastructure and industrial parks.

Foreign direct investment inflows, meanwhile, have declined steadily since a 2016 peak of more than $4 billion, slipping to about $500 million for the first quarter of this fiscal year.

Inflation is hovering about 20%.

“There are very few ways out of this. They aren't going to get more money from the IMF. They can't go to the markets. Their best bet is a global economic recovery next year,” said Menzi Ndhlovu, senior country and political risk analyst at Signal Risk, an Africa-focused business consultancy.

And the government is pushing ahead its plans to open up the telecommunications sector. It opened tendering for two new telecoms licences at the end of November and plans to sell off a minority stake in state-owned Ethio Telecom.

Sources after the process, which should provide the beleaguered economy with a hefty injection of dollars, said interested companies were not deterred by the current unrest.

But for now, Ethiopia's grand manufacturing dreams have been dealt a setback.

“Who will go there in this situation?” asked DBL's Waseq, who has returned to Bangladesh. “No-one.”