TPLF leaders had said they were fighting back 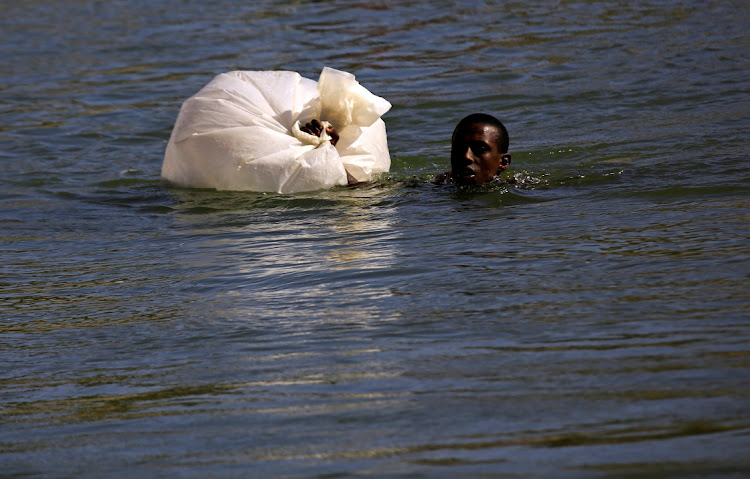 An Ethiopian man who fled the ongoing fighting in Tigray region, holds his belongings as he crosses the Setit river on the Sudan-Ethiopia border in the Hamdayet village, in eastern Kassala state, Sudan December 15, 2020.
Image: MOHAMED NURELDIN ABDALLAH

Ethiopia offered a 10 million birr ($260,000) reward on Friday for information on the location of fugitive leaders of a rebellious force in northern Tigray region.

The money for helping capture heads of the Tigray People's Liberation Front (TPLF) was announced on state-run broadcaster EBC and tweeted by a government taskforce.

TPLF leaders, possibly hiding in surrounding mountains since they lost Tigray's capital on Nov. 28, had said they were fighting back. Reuters has not been able to reach them for comment for more than a week.

Thousands of people are believed to have been killed and nearly a million fled their homes after two years of feuding between Prime Minister Abiy Ahmed's government and the TPLF erupted into war in early November.

Sudan's armed forces said on Wednesday that a number of its officers had been ambushed by "Ethiopian forces and militias" during a security patrol of ...
News
11 months ago

Some power and phone links have been restored after a virtual blackout since the federal offensive began on Nov. 4. But access for media is still restricted and accounts from all sides are hard to verify.

Aid agencies have warned of a humanitarian crisis in Tigray, where about 600,000 people depended on food aid even before the war.

The United Nations and other agencies are still pressing for safe access to most of the region.

The U.N. World Food Programme sent 11 trucks worth of food to two Eritrean refugee camps in the southern part of Tigray that arrived in the camps on Wednesday, the U.N. Office for the Coordination of Humanitarian Affairs (OCHA) said.

Despite the arrival of some aid, needs are increasing, OCHA spokesman Saviano Abreu said. "People have now been living for more than six weeks with no running water, no access to health services, no cash and very limited access to food."

He said the United Nations was still negotiating with the Ethiopian government for full and unhindered access and reiterated the global body's call for all parties to allow all aid groups into Tigray.

Ethiopia sent civil servants in Tigray back to work on Monday and ordered gun owners to disarm as Prime Minister Abiy Ahmed's government sought to ...
News
11 months ago

Ethiopia's government on Friday denied that the war in its northern Tigray region was preventing aid reaching civilians, as two foreign aid agencies ...
News
11 months ago

Ethiopia and the United Nations agreed on Wednesday to channel desperately-needed humanitarian aid to the northern region of Tigray, where a month of ...
News
1 year ago
Next Article