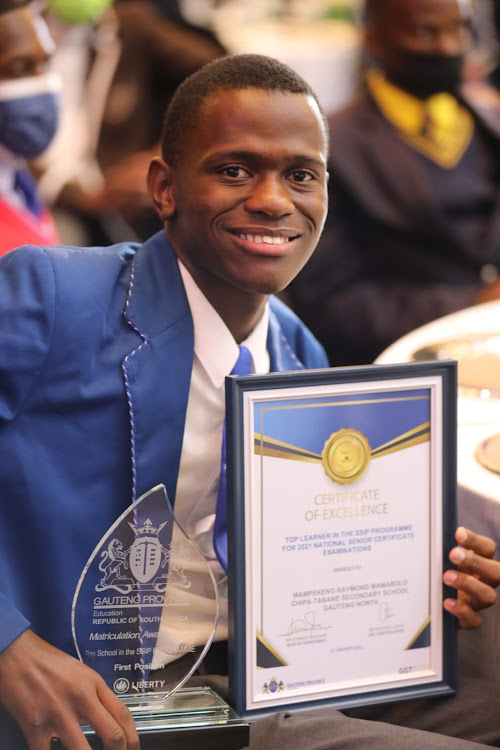 Raymond Mamabolo has emerged as the top achiever in Matric Class of 2021 in Gauteng.
Image: Antonio Muchave

Marischen Mamabolo was relieved when her son Raymond was named the top performer from Gauteng schools.

Mamabolo, 44, said she spent sleepless nights worrying about her son's future as she did not have money to take him to university. Raymond, 17, from Chipa-Thabane Secondary School in Cullinana, east of Pretoria, was among the top 55 matric achievers in Gauteng.

The Gauteng government has offered the students a full bursary to institutions of their choice for the duration of their studies.

Raymond got 100% in three of his subjects, physical science, life sciences and mathematics.

He was also announced as the top performer in township schools.

"I am very excited and his results did not surprise me at all. He is very disciplined child who is always focused on his book. As a single parent I was very worried about his university fees. He had applied for the national financial student aid scheme and we were still waiting for the response," Mamabolo said.

Raymond said he was excited but not surprised at his results.

"I started preparing for grade 12 when I was in grade 11. I spent all of my time studying because I wanted to get better results," he said.

Raymond plans to study Actuarial Science with the University of Cape Town. Busi Lizzie Khoza, 18, received a 100% for Accounting. She was offered a full bursary by South African Institute of Chattered Accountants. The former student at Dr Sam Mutsuenyane Comprehensive School said she was shocked.

"I did not expect this as the accounting exam was a little but tricky for me. I am excited though as I want to pursue Bcom Accounting with University of Cape Town.

The class of 2021 had the highest enrolment and the largest number of pupils sitting for the matric examinations, basic education director-general ...
News
3 months ago