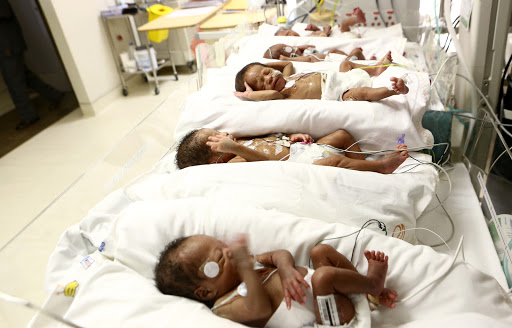 The Buthelezi quintuplets seven days after being born are all breathing on their own.
Image: Masi Losi

While the country celebrated the news of the birth of a set of quintuplets last week, a Johannesburg bride-to-be was reeling in shock after learning through the media that the lucky father was actually her fiancé.

Sowetan has learnt from well placed sources that the woman had been planning a white wedding with Joe Buthelezi who made headlines after his partner gave birth to five infants at the Clinix Botshelong-Empilweni Private Hospital in Vosloorus on September 6.

However, Buthelezi denied the allegations that he had been planning a wedding.

“I had paid lobola during the year indicated [2014], but I am not in a relationship with her anymore. There were no plans for a wedding. I am devoting my life and energy to the mother of my five kids,” Buthelezi said on Wednesday.

The woman’s relative told Sowetan that she had suffered immense stress after reading the articles that Buthelezi was the father of the quints.

"These children‚ the four girls and a boy‚ have placed Ekurhuleni and indeed Gauteng in the world map."
News
3 years ago

Joe Buthelezi‚ the father of the quintuplets born in Vosloorus almost collapsed when his fourth and fifth babies were born.
News
3 years ago

The Buthelezi quintuplets at the Clinix Botshelong–Empilweni hospital in Vosloorus.
Image: Masi Losa

She said Buthelezi had kicked the woman out of their home in Boksburg in May after she went to a family gathering without his permission.

She said elders had intervened to help the couple resolve their issues and preparations for the wedding were back on track until they read in the newspaper how Buthelezi collapsed from shock at the hospital as the quintuplets were being delivered.

“He probably collapsed because he knows what he has done. They stayed together for six years at his home in Sunward Park. He paid lobola for her in 2014. I used to visit them all the time. The family was preparing for a wedding,” the jilted woman’s relative added.

The relative said Buthelezi had told his fiancée he did not want more children.

“He said he was not ready to have children with her because he already had other children.”

She said Buthelezi met their family three weeks before the birth of his children made headlines and had promised to come back to fetch his fiancée so that she can move back into their home. She said the situation had taken its toll on the woman’s health and she was in need of counselling.

“Right now the situation is very bad. Joe is not answering calls,” she said. Another male relative confirmed they were seeking advice on how to resolve the matter.

“Our mkhwenyana (son-in-law) has left our child confused and we do not know what to do,” the man said.

Buthelezi said he dated the woman but they broke up.

“I ended my relationship long before. I chased her away when she took my car and spent a weekend in Rustenburg with a boyfriend,” Buthelezi said. He claimed that this was not the first time she had cheated on him.

“There is no relationship at the moment, except that she sends insulting messages. I have not wronged her in any way,” Buthelezi said.

When contacted the woman denied that she had cheated on Buthelezi but declined to speak further.