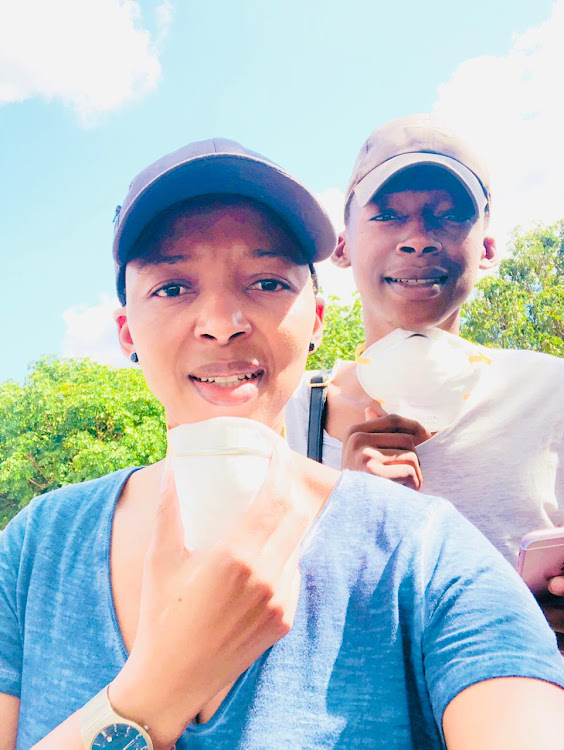 Thuli Mashaba and her son Siyabonga Malinda have a relationship like no other.

The two spoke to SowetanLIVE about the ups and down, and lessons learned over the years ahead of Mother's Day.

Mashaba who had Siyabonga when she was only 21 said their relationship is an open and honest one.

"Our relationship is a happy & healthy one, we are close, we are open, we discuss each other’s personal issues, we help each other out. We have disagreements from time to time, we 'fight' constructively for each of us to be better & more understanding of each other’s point of views regarding a matter at hand or any other matter that we may talk or debate about," she said.

Malinda, 21,  sees his mother as his best friend.

"I would say we're like best friends because we talk about almost everything and anything but without crossing the parent and child line. It's not perfect, still a lot to work on but I'd say we have a much better relationship than most boys have with their mom," he said.

Mashaba said her son grew up as a naughty and often times disruptive boy but has grown into himself.

"He participated a lot in sport, especially running, cross country, he’s got more than 30 medals. Academically, he’s done well as well, I’m proud of him. He’s become an independent young man, knowledgeable, opinionated, bold & confident. There’s no matter you can’t discuss with him - from soccer to cars, to politics and social issues like gender-based violence. He’s sensitive, considerate & protective of women & children, he loves children so much," she said.

Actress Nomzamo Mbatha is the kind of daughter most mothers' wished they had as she takes her mother on her first international trip to İstanbul in ...
Entertainment
1 year ago

Celebs tell of stress, joy of giving birth during lockdown

Only a foolish man gets in the way of an expectant mother and her birthing plan.
S Mag
1 year ago

She added that it was difficult to raise him because she was a young single mother.

"Being a single mom raising a boy child wasn’t easy, I remember vividly when he was 12 going on 13, praying specifically for the teen years ahead into young adulthood. I can confidently say I’m truly proud & thank God for His grace where my son is concerned. I have never been to the police station, clinic or hospital due to fights or any mischief, never been to some family home to discuss mischievous behavior or him beating up girls. He’s not perfect but I’m proud of the young man he’s become," said Mashaba.

The two admire each other very much. Mashaba said she loves that her son is liberated and speaks his mind, while the young Malinda said he admires that she is honest with him.

"She's always been straight up with me regarding everything and regardless of whether it'll hurt me. But in a way that is better than misleading me with lies. That's the one thing I admire about her," he said.

Looking towards the future, Mashaba said she hopes to continue strengthening their relationship.

"I want us to continue to grow as a team, in business, as best friends & as mother & son. We’d like to build an empire together and uplift the community," she said

Mashaba is the executive director of construction company 'Hula U Gude'. She is also known for her philanthropic efforts in building decent toilets for poor rural schools in Mpumalanga where she was born.

Disclaimer: Due to the country being on lockdown, please note that all winners will receive their prizes post the lockdown. Unfortunately the date cannot be confirmed at this stage.