LISTEN | Zozibini Tunzi speaks to Trevor Noah on his show 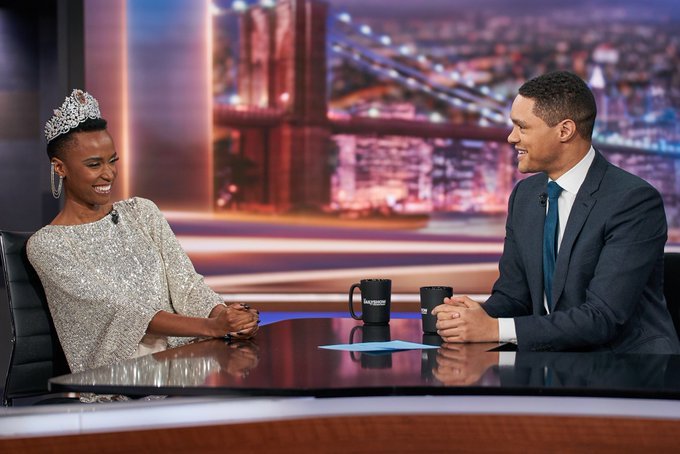 SA's pride Zozibini Tunzi has opened up to Trevor Noah on the hate she's been receiving since being crowned Miss SA and Miss Universe.

She sat down with Trevor on The Daily Show on Wednesday and spoke about her journey since winning both titles this year.

As the pageant has evolved over the years, putting women empowerment at the forefront of what the title holder had to embody and express, Zozibini explained that she wouldn't have been able to keep going if it weren't for the support of the people back home in SA.

Zozibini admitted that some had felt that she was a “downgrade” Miss SA winner when she won the title in August.

She added that the backlash got more international when people found out that she was going to compete in Miss Universe.

“International people started commenting and I think my most interesting one was when I came to New York, I think four months ago. I came back to SA. It was late in the evening and I took a photo of my apartment and I was like, ah, it's such a beautiful night and a comment came in ... saying ah, this photo is so black, it's as black as you are, Miss ugly SA.'

“I think it was in that moment where I was like, I'm not even mad because it's just how society has labelled people to be. It's like how we have been programmed to see beauty that way, you know.”

She decided to use her platform to educate people on the different sides of beauty.

Zozibini also touched on issues regarding gender-based violence in SA and how important it was for people to mobilise and be a part of movements that will help fight the scourge.

Speaking to Sunday Times after winning the Miss Universe title, Zozibini spoke about keeping her natural look while competing for the title, and said, “I decided to keep my hair short, embrace my natural look. If they take me the way that I am, fantastic, if they don't that's fine too. They took a chance on me and now here I am.”

Excited about her interview, Zozibini shared a snap of the pair on the show.

“What an incredible first week it has been,” she added.

I couldn’t have thought of a better way to wrap up my interviews. What an incredible first week it has been. Thank you @trevornoah @thedailyshow for having me. You were the perfect host. Catch me tonight on Comedy Central at 11pm ET! ?