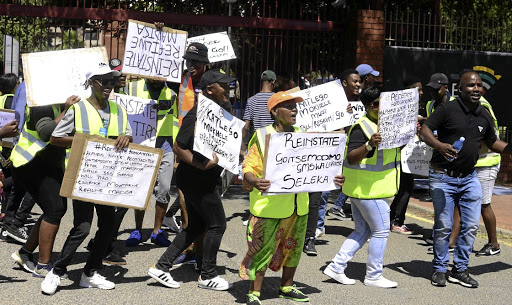 It's shaping up to be a blood-bath ahead of the much anticipated annual radio reshuffle.

They also had strong words for the station on their placards and the memorandum of events they handed over to the station.

Top of the list, they want Mokhele gone and veteran broadcaster Snyman Rankane to occupy his place while a forensic investigation into how Mokhele ran the station is instituted.

Furthermore, they demanded hands off long serving presenters like Alpheus Koonyaditse, Goitsemodimo Seleka, Peter Manzana and Stella Sebalo and to have them on air come April 1, the date of the radio changes.

They demanded that no TV personalities like actor Rapulana Seiphemo and presenter Refilwe Modiselle be appointed as radio hosts as it is to the "detriment of Setswana".

The SABC has confirmed a handful of big changes to some of its stations‚ including Metro FM.
Entertainment
3 years ago

According to the protest co-ordinator Mmakhuduga Mosenogi, they want Mokhele to go because "he does not understand Setswana".

"He must go because he hires television stars instead of real radio presenters. We want the station to renew contracts of the Setswana-speaking presenters who are leaving."

"In our march we had a 58-year-old woman who came all the way from Dobsonville. She complained about vulgar language and Sammy Fever's controversial show Kgotlha O Mone."

Mosenogi said they had meetings with Mokhele where they complained about Sotho-speaking presenters.

"Katlego told us that he employed the Sesotho-speaking presenters because they had promised to learn Setswana."

SABC regional manager Raymond Makgopa received the memorandum and promised to respond within 24 hours. Mokhele could not be reached for comment.

SABC spokesperson Vuyo Mthembu said: "The SABC can confirm it has received the memorandum delivered by the Oupa Matla Foundation at its Mahikeng offices. Once it has studied the memorandum, the SABC will respond to the foundation".

Meanwhile, in Johannesburg, veteran radio personality Kgomotso "KG" Moeketsi has left the building with an untimely ending to her colourful 11-year tenure at Radio 2000.

Moeketsi sent shockwaves in the industry on Wednesday when she announced that she quit her weekend breakfast show Rise after she refused to take a 40% salary cut.

"It was an easy decision for me because I refuse to play small. I'm very aware of what I offer them, and the numbers have consistently proven so."

"To cut a long story short, I quit, and told them 'no thanks' to an offer that was an insult to me, considering in the last year alone I'd delivered numbers that were exceptional."

Moeketsi, who has 24 years radio experience, has accused the SABC of outrageous gender wage gap.

"I went on to tell them how much as an entity, I feel they are disempowering to female presenters as they pay their males, who at times don't deliver the required numbers, exorbitant salaries," she said.