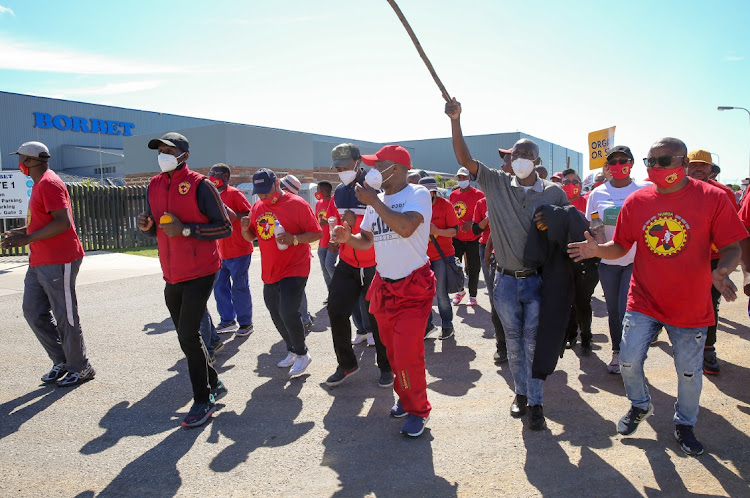 National Union of Metalworkers of SA (Numsa) members downed tools on Wednesday as it embarked on the first day of an indefinite strike.
Image: Werner Hills

SA's largest metal-workers' union began a strike at ArcelorMittal South Africa Ltd on Wednesday after wage negotiations broke down, the steelmaker said in a statement.

The National Union of Metalworkers of South Africa (Numsa) had given notice of the strike on May 9, ArcelorMittal said.

"It was hoped that this action could be averted but this has not been possible," it said.

The company, Africa's largest producer of steel, added that it had made a final offer of 7%, against the union's demand for a 10% increase, a housing allowance and payment of 80% of medical insurance costs, among other demands.

"The company is concerned that unsustainable increases in base pay will lead to cost pressures which will weaken our competitiveness," ArcelorMittal South Africa CEO Kobus Verster said in a statement.

"Our industry remains very cost sensitive, challenging and volatile. To survive and be sustainable, we need to ensure that our cost base remains competitive so that we can manage through the downturns."

The company said it had measures in place to limit the effect of the strike, adding it could not immediately tell how long it would last or its impact.

On Tuesday, the union said the strike was indefinite and would take place at all ArcelorMittal plants in South Africa. It also called on its members to picket at the company's operations on Wednesday.

The National Union of Metalworkers of SA has written to Saftu secretary general Zwelinzima Vavi demanding that he immediately call a special central ...
News
2 months ago

A union representing workers in the commuter bus services sector has suspended a strike action that was planned to hit the sector during the ...
News
2 months ago

The National Union of Metal Workers of South Africa (Numsa) has vowed to intensify the strike against companies who refuse to implement the wage ...
News
3 months ago

The National Union of Mineworkers (NUM) said it was disturbing that poor mineworkers "continue to die like flies" in a "careless" industry.
News
1 month ago

The EFF is working on establishing a labour union to address challenges faced by workers, its leader Julius Malema told a May Day rally on Sunday.
News
1 month ago

The worsening decline of NUM and other industrial unions will weaken the capacity of Cosatu as the country's biggest federation in its role to defend ...
News
2 months ago
Next Article