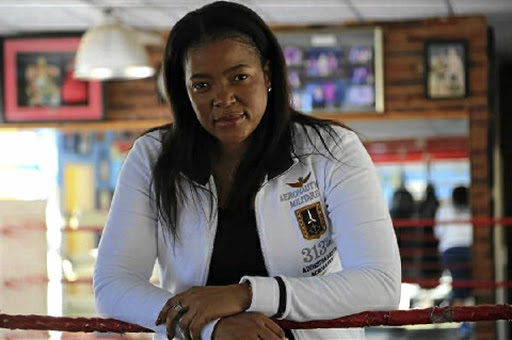 Boxing promoter Mbali Zantsi is taking the tournament to her hometown.

The country's most accomplished female boxing promoter Mbali Zantsi has confirmed that she will stage her first tournament in Port Elizabeth on March 23.

Affectionately known as "Don Queen", Zantsi has spent 20 years in Johannesburg where she forcefully invaded the historically male-dominated sport by staging super tournaments.

Some were part of Women's Month celebrations. SA commemorates its Women's Month in August as a tribute to more than 20,000 women who marched to the Union Buildings on August 9 1956 to protest against the extension of pass laws to black women. August 9 is celebrated annually as Women's Day.

So her upcoming tournament is about celebrating the International Women's Month in March.

Zantsi said her Showtime Boxing Promotions will indeed swing back into action after six months of nonactivity.

"We will continue pushing for the empowerment of women by staging another women-only tournament," said Zantsi, whose hard work and dedication has earned her the Women in Sport award twice with G-Sport Magazine, WBF promoter for 2015/16 and the Boxing SA's 2016 chairperson's awards.

She paid tribute to the Nelson Mandela Bay municipality for their involvement, sport minister Thokozile Xasa, the MEC for sport in the Eastern Cape Bulelwa Thunyiswa, Lehlo Mfana and Noxolo Nqwazi, both from Nelson Mandela Bay.

Women's boxing in South Africa is nothing but an illusion.
Sport
2 years ago

"I am standing on the shoulders of these giants," said Zantsi, making it clear that she had intended pitting girls from Port Elizabeth against others around SA.

"I am saddened that I will not be able to do that. I had intended having local girl Nozipho Bell challenging Ndobayini Kolosa for the SA title. I then postponed the tournament to March 23 and Bell's manager went on to sign with another promoter and I hear that that tournament is no longer happening."

She said she then negotiated with Melissa Miller from Eldorado Park, south of Johannesburg, to defend her SA bantamweight title against Thema Zuma from KwaZulu-Natal.

"Nonetheless we are taking the tournament to the people. Admission is free because we want to get as many children and families as possible."

The last time she staged a tournament was on September 8 when Unathi "African Queen" Myekeni won the WBF featherweight belt in Kagiso.