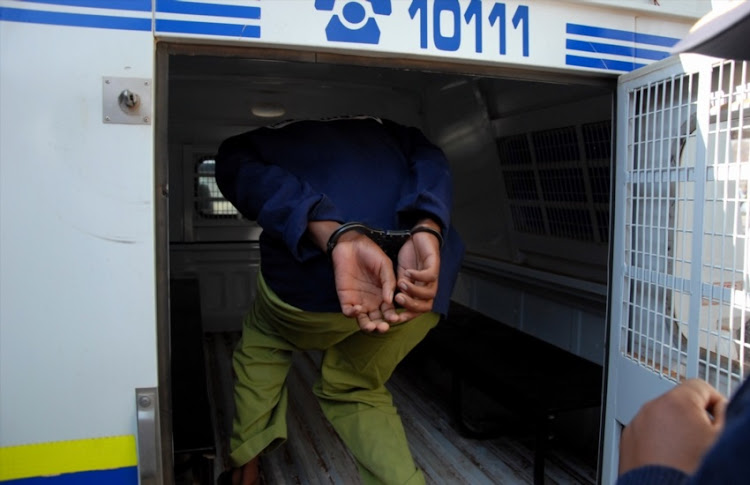 A man gets inside a police van after his appearance at the Court.
Image: GALLO IMAGES

The father of Orlando Pirates captain Thabo Matlaba appeared in court yesterday in connection with the murder of a man he allegedly stabbed in a dispute over a woman.

Kolodi Ezekiel Matlaba appeared in the Phalala Magistrate's Court in Limpopo following an incident that happened on Sunday. The 63-year-old had been on the run after he allegedly stabbed William Mafokwane to death in Senita village. The two were allegedly fighting over a woman with whom Mafokwane had fathered a baby girl.

Police spokesman Colonel Moatshe Ngoepe said Matlaba had fled to Tembisa in Gauteng but that his son, the Buccaneers' defender, handed him over to the police in Villa Nora on Tuesday afternoon.

"Matlaba appeared in court together with his [alleged] accomplice Seliki Right Mabokela, 76, for the murder of Mafokwane. Their case was postponed to July 10 and they are both in lawful custody," Ngoepe said.

According to the victim's sister Sarah Mafokwane, Matlaba had entered their home on Sunday afternoon in a fit of rage, demanding to see her brother.

He allegedly threatened to wipe out the whole family if he did not find the 29-year-old man. She said he claimed Mafokwane had kicked him on the chin.

Upon leaving the home of the victim, Matlaba reportedly met Mafokwane along the street and stabbed him with a knife.

Suspect on the run after fight over deceased's baby mama.
News
3 years ago

Ngoepe said Mabokela was an accomplice in the matter but did not divulge the nature of his involvement.

"As police we would like to commend the action by family members to hand over their relatives who are suspects in criminal matters to the police. This goes a long way to show that there is cooperation between the police and the community."

Approached for comment yesterday, the Pirates defender said he was busy at work. "Unfortunately, I'm not in a position to speak to you as I'm at work now," he said before he hung up.

The victim's 50-year-old mother, Jekina Mafokwane, said: "The people responsible for killing my son have caused an unbearable pain to me and the entire family. They must rot in jail."

Cops say they will probe the attack.
News
3 years ago
Next Article