Molefe and Transnet sued for R800k 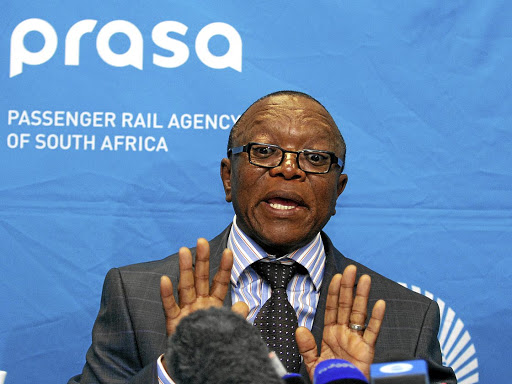 Transnet board chairperson Popo Molefe and the logistics parastatal have been slapped with a defamation lawsuit amounting to R800 000 by one of its suspended executives.

Thamsanqa Jiyane, suspended chief officer for advanced manufacturing of Transnet Engineering, filed papers in the South Gauteng High Court in Johannesburg this week claiming Molefe, who was appointed by public enterprise minister Pravin Gordan to lead the board, had defamed him in a statement released to the media.

At the heart of the legal battle, according to Jiyane's particulars of claim, is allegations that the Transnet executive was implicated in investigations commissioned by the board on an irregular Transnet tender which escalated to R54bn.

According to the media statement annexed to the papers, Molefe had announced that Jiyane and his colleague Lindiwe Mdletshe, a senior manager for strategic sourcing at Transnet Freight Rail, were served with formal notices of the intention to place them on precautionary suspension but failed to convince the board in their representations.

"The board concluded that representations by the employees were implausible and that their continued presence at Transnet is likely to hinder and prejudice further forensic investigations that the board has instituted."

Further charges against the implicated parties include the withholding of company information that is crucial and relevant to the locomotives tender from the forensic investigation, not co-operating with investigators and refusing to hand over company property in the form of laptops, mobile phones and other devices," reads the statement.

Transnet CEO Siyabonga Gama was fired from the state-owned entity on Sunday.
News
3 years ago

Among other insinuations by the statement, according to Jiyane, is that it could be understood to mean that he was dishonest, corrupt and lacked moral fibre.

He said the statement was issued with the intention to defame and to injure his reputation. "As a result of the defamation, the plaintiff has been damaged in his reputation and has suffered damages in the sum of R800000," read the papers.

The papers show that Molefe and Transnet were instructed to retract the statement and to issue an apology to Jiyane, but allegedly failed to do so despite receiving a letter of demand.

As a result, Jiyane instituted the action against Molefe and Transnet.Molefe said: "If those people have issues with me, they will serve me [with the court papers] and not the media. Until then I have no comment."

Jiyane's lawyer Nicqui Galaktiou said: "The purpose of the summons arises from the incorrect, false and defamatory remarks in a media statement issued on 6 September 2018 by Dr Molefe about Mr Jiyane."When requested for a retraction and apology, Dr Molefe failed and refused to do so."

Transnet board chairman Popo Molefe has indicated that criminal and civil actions may have to be pursued CEO and two others.
News
3 years ago
Next Article