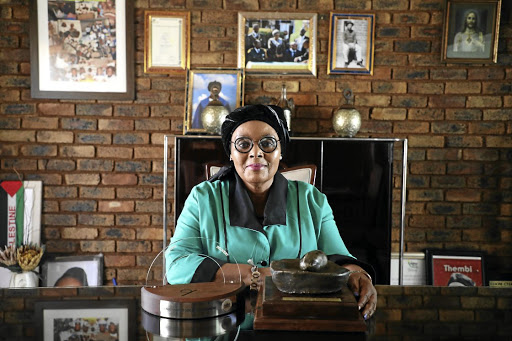 Thembi Mmoko is the longest-serving ANC councillor in the Tshwane metro with more than 20 years as a public servant.
Image: Thulani Mbele

I was reluctant to conduct the interview, citing a possible bias. But the editor dug in her six-inch heels and insisted, "you are better placed to interview her. She's the Winnie Mandela of your village."

With that, I grudgingly headed to Pretoria east and after exchanging pleasantries with ANC Women's League leader and City of Tshwane councillor Thembi Mmoko, I shot my first question, one that I had been itching to ask since the 1980s.

"Why did they say you were a bad woman when I was growing up? They said you hid 'terrorists' in your house."

With that, Mmoko, 64, opened the floodgates and took me on a journey that started when she was 17, while attending boarding school where she organised a protest march against a hostel matron.

Mmoko, nee Magubane, later got married to Alpheus and the young family settled in the small, dusty village of Stinkwater in Hammanskraal in 1974. It was here that Mmoko would harbour 11 young "comrades" who had fled Soweto after the 1976 student uprisings.

On return, some of them became members of the feared uMkhonto weSizwe G5 unit that launched a number of attacks on police stations, courts and other strategic installations like power stations.

"I have always detested inequality and any form of oppression. When I got to Hans Kekana boarding school in Hammanskraal in 1971, I realised that the matrons at the hostel were behaving like dictators over the learners. 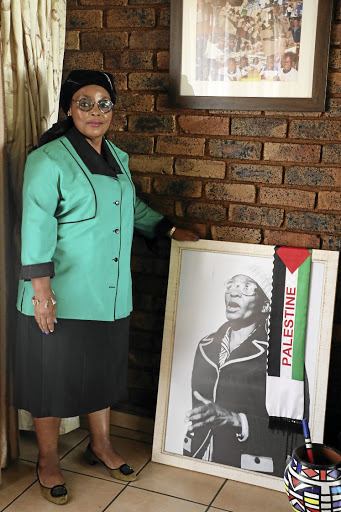 Activist Mmoko stands next to a photo of her relative Pauline Moloise, mother of hanged poet and activist Benjamin.

"One day we came back to our dormitory and found our neatly ironed school uniforms on the floor. She just tossed everything upside down claiming that we didn't follow the rules on how we were supposed to hang the uniforms.

"I organised a few girls and we marched to the tribal authority offices in Majaneng, not far from the school. The school was built and run by the Kekana royal family. They listened to us and came back to school with us.

"After having a meeting with our principal, the matron was suspended. I was happy because I felt like the good had prevailed over the bad."

Mmoko said her contact with the young activists started when her cousin Benjamin Moloise ran away from Soweto after the June 16 1976 uprisings and needed a place to hide.

"He came to stay with us and soon I was asked if I could take in more. I received them with open arms. I hid them in one of the outside rooms and soon started slowly integrating them into the community.

"My husband ran a football club called Pull Together and we made them part of the players. We also ran a grocery store and the guys would take turns manning the counter.

"I had to later convert one of the bedrooms in the house into a secret room where we kept guns and arms like limpet mines. I also had to learn how to handle these weapons."

The fiery mother of two sons said she did not know where she got her bravery from but she was also used as a conduit to distribute money and weapons.

"I also smuggled messages to those in prison."

Mmoko said her world almost ended when her house was raided and one of the comrades was shot and wounded before being arrested.

"Thabo Marcus Motaung was shot while trying to clear a fence behind the shop. Solly Shoke ran away and went to hide in the nearby village of Trust Farm. Benjamin was arrested while he walked into the home of his girlfriend. But they couldn't find the weapons. Some of them were hidden in washing powder boxes and packed like any other goods in the shop," she said.

No one takes women seriously; Women's Month is yet another capitalist dream.
Opinion
3 years ago

Mmoko said after Joe Slovo's wife Ruth First was killed with a parcel bomb in Mozambique, anger grew and ANC president Oliver Tambo took a decision that the apartheid government had to be confronted.

That was when the G5 unit was formed under the leadership of Nyanda. When the comrades came back as trained soldiers, Mmoko found them a safe house and helped them build a base in the bush close to the feared SAP Training College in Hammanskraal.

The base was later given away by a cattle herder. Police surrounded it and arrested Motaung, Jerry Mosololi and Thelle Mogoerane. Nelson Hlongwane escaped and Mmoko helped him to skip the country into Swaziland.

"My comrades were hanged on June 9 1983. It was the most painful period in my life as a freedom fighter. I felt like they should have executed me as well. Two years later, it was my cousin Benjamin who was executed. I had tried everything to save him, including criss-crossing Europe to try and have him reprieved. He was executed on October 18 1985," she said, with tears rolling down her face.

Just when Mmoko thought she was defeated, she received a letter from Tambo acknowledging her work. This breathed new life into her.

After the unbanning of political parties and the release of political prisoners in 1990, Mmoko was in action again leading a committee that was receiving returning exiles and helping them reintegrate.

She also turned her attention to the development of women and children in the village .

She registered Masana Rural Development Centre and ran everything from a vegetable garden to adult and computer literacy classes as well as sewing and knitting classes.

"I wanted to empower all women in the village because I didn't like the conditions of subjugation that they were living under."

Mmoko was also instrumental in the formation of Moretele FM, a community broadcaster.

Her work has won her numerous awards and until two years ago, when the ANC lost control the City of Tshwane, she was the MMC for corporate and shared services.