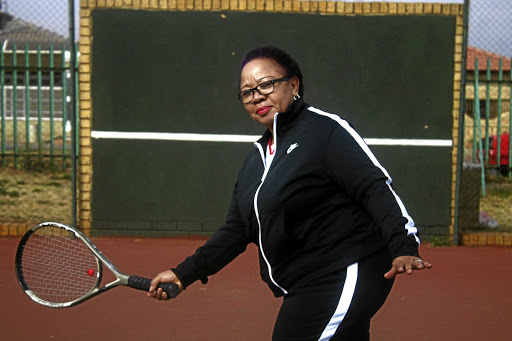 Sompi Madika started playing tennis at 14 and remains passionate about the sport to this day.
Image: Kabelo Mokoena

Well, it took some doing locating veteran Soweto's former professional tennis player Sompi Mary Madika, but I finally located her at her home in Moletsane, just a stone's throw away from the very gravel courts that nurtured her to become a household name.

On meeting, through a stroke of good fortune, she exuded wit, coupled with an inquiring mind. She ushered me in with a smile to a couch in her modest home for us to chat about her illustrious career.

At 59, the former professional tennis player and coach, who now works at Checkers as a clerk, concedes age has caught up with her and though some of her achievements and honours may escape her memory, she was willing to indulge me.

Her long-held desire is to revive tennis in Soweto.

"It's my long-held dream to bring back the glory days of the Soweto Open tournament, most significantly to rescue the youth out of the drugs squalor they are drowning in at the moment. I'll be retiring soon, then the work will start in earnest," she said.

Madika was born and raised in Moletsane and her mother Maria Madika, who is now her next door neighbour, was an ardent tennis player as well.

"My mom was born in Brandfort. My whole family, my uncles and aunts, were tennis players. The family moved from the Free State before I was born to settle here in Moletsane."

Brandfort is famous as the town Winnie Madikizela-Mandela was banished to in 1977.

"I was introduced to the sport by my mom, an astute player in her own right. I was 14 at the time, at higher primary school. I was more in love with basketball. I had no choice. I was compelled to take up tennis together with my sister Victoria Madika-Ntlatleng." 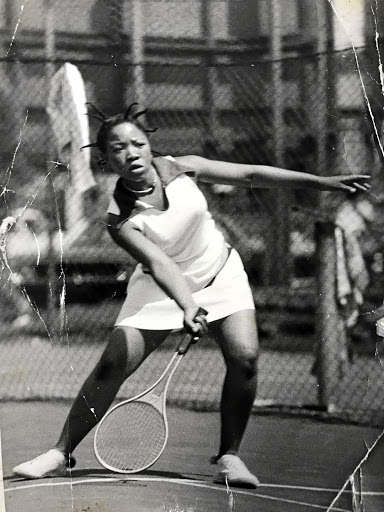 The elderly maMadika was at the forefront of soliciting donations to erect the Soweto Lawn Tennis Association courts and club house in White City Jabavu in 1977, built through a donation from American tennis player and Grand Slam winner Arthur Ashe. After his Soweto tour

"I was young then but my mom tells me sadly the event was hijacked by local businessmen, politicians and councillors. The hosting of Ashe's dinner was at businesswoman Marina Maponya's home in Dube. But the local tennis fraternity, officials and players were sidelined," she recalled of Ashe's historic visit.

By the time she reached high school at Thomas Mofolo Secondary and Seana Marena High, Madika was making a clean sweep of singles trophies.

"We played on gravel, dusty courts. The surface was flattened using a manual, heavy leveler. We were rarely invited to tournaments in suburbs because of apartheid laws.

"But if you were selected, it was prestigious as only the top players were invited to Ellis Park. I got the chance to play there and at Wits but it was not against white players."

Madika also competed in Lesotho, Botswana and in Bophuthatswana.

"I remember entering to play at a tournament in Mahikeng under an assumed Setswana name because the tournament was exclusively reserved for 'Batswana' players," she quips, laughing.

"I won the singles match.

"The great Mirriam Chochoe was another top ladies tennis player. We used to win events and play against each other, she would beat me at times and I would reciprocate by beating her."

What pains Madika most is the fact that the present generation of youngsters are not grabbing the abundant sporting opportunities at their disposal.

"During the late 70s and 80s we didn't have sponsors pumping money into black tennis. Parastatals like Eskom did, however, come to our aid.

"I remember in 1985 winning the Eskom-sponsored tournament singles title. I was working and playing at weekends. There was no such thing as being a full-time professional. I played until the seventh month of my pregnancy."

"We played for glory. Holding the trophy aloft was the ultimate prize."

One of the most cherished moments of Madika's distinguished tennis career was when she caused an upset in the ladies singles semifinals in Lesotho in 1982 by beating that country's second seed. "Unfortunately in the final I succumbed to my compatriot and top seed Pascalina Katu."