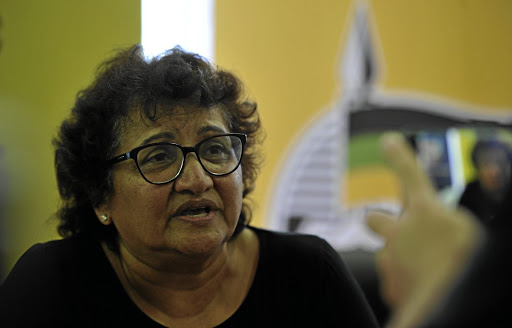 Jessie Duarte's response to eNCA journalist Samkele Maseko did not come as a surprise in media circles as her abrasive demeanour is an open secret, says the writer, after the ANC secretary-general unleashed vitriol on the hapless reporter.
Image: Gallo Images / Netwerk24 / Lulama Zenzile

The heat is on with a month left before we go to the polls. Townships are going up in flames as communities seek the attention of politicians.

For their part, politicians are engaged in a cockroach dance of their own, making blunders that should bury their prospects in the elections if South Africans were not so forgiving. Unfortunately, my colleagues in the media are also caught in the crossfire as politicians shoot themselves in the foot.

First off the block was EFF commander Julius Malema who publicised the contact number of journalist Karima Brown to a horde of his bullies last month. Brown faced a barrage of threats from the
so-called fighters.

Malema further warned of a media blackout to shield his party from a perceived onslaught from the Fourth Estate. Talk about cutting your nose to spite your face.

Not to be outdone, ANC deputy secretary-general Jessie Duarte took umbrage to a question from eNCA's Samkele Maseko this week.

She unleashed vitriol on the hapless reporter at a press conference because Maseko had unflatteringly called her a gogo (grandmother).

Duarte's response did not come as a surprise in media circles as her abrasive demeanour is an open secret.

Even so, this does not excuse the behaviour of one of the senior officials who somehow believes freedom of speech is only the right of those who fought for liberation.

Unfortunately, her party has so many smallanyana skeletons that refuse to be buried under Luthuli House. The stink of corruption hanging over the ANC is so putrid that the party believes individual leaders should deal with accusations on their own.

The ANC has described a tongue-lashing delivered by its deputy secretary-general Jessie Duarte to a journalist as unfortunate and not in the spirit ...
News
2 years ago

Instead of exorcising leaders who face serious accusations of corruption and lying under oath, the ANC rewarded them with a place on their parliamentary lists. Essentially, Africa's oldest liberation movement is telling the public that it lacks leaders of moral rectitude in its ranks and we must just accept the names on the lists. The other ruse employed by the ANC is to suddenly offer almonds to voters.

The government has cancelled the debt of students who owe universities and suspended the e-toll debt in Gauteng for now. Suspended is the operative word since Gauteng motorists have made it clear they could not afford to pay more for the highways.

The ANC clearly fears losing the richest province to the opposition but is not brave enough to dismantle those unsightly gantries.

Gauteng MEC for sports Faith Mazibuko takes the cake after she was caught in a recording scolding her officials for not signing off combination courts before May 8. She lost her cool when they told her the combi courts were not budgeted for.

I happened to be in Matjhabeng in the Free State this week where the broke municipality was frantically putting a fresh coat of paint on lamp posts. Unfortunately, most of the street lamps are not working but someone higher up decided a paint job will tickle the fancy of voters.

For the life of me, I have perused the manifestos of the parties on the ballot paper but I am none the wiser on who deserves my X.

The SA National Editors’ Forum (Sanef) has criticised an “attack” on an eNCA journalist following an ANC press conference in Johannesburg.
News
2 years ago
Next Article