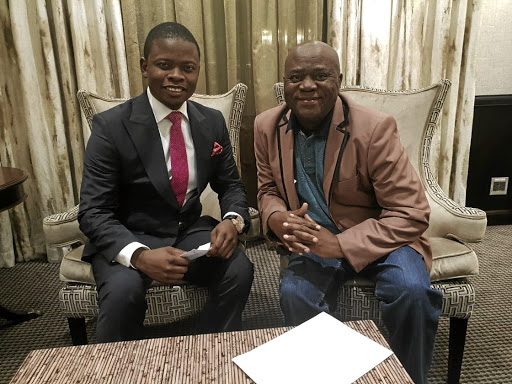 Moholo is also set to leave ZCC to become a full-time Bushiri disciple.

The singer will dance to Bushiri's church in Pretoria tomorrow where it is expected he will be welcomed by the revered Holy Joe, his church council and congregants.

Moholo, made famous by his ZCC-aligned mokhukhu gospel music, confirmed that he crawled to Bushiri for blessings.

"In him I saw how big God is. He is an amazing angel of God. He will help me spiritually and give me support to deal with my challenges."

Although Moholo was shy to nail his colours to the mast on whether he was leaving ZCC to become Bushiri's follower, it is understood he was expected to send a resignation letter to his church in the coming week.

"I don't want to dwell much on that for now. Nobody is like Bushiri on this Earth. God has chosen him, I saw power in him and all of us want to be close to the chosen ones," he said.

Moholo said he will launch his forthcoming album Palamente a Kgopela Merapelo at Bushiri's church. It features the hit ditties Soul and Ntafeka Njani Dubai.

"They will hear these songs there and I know they will like them. I will also join the Thuma Mina campaign to support President Cyril Ramaphosa by visiting various parts of the country to spread his message," he said.

Bushiri said Moholo came to him for spiritual assistance and he was looking forward to working with him.

"He is a man who has been raised in a big church, meaning he has grown up fearing God. It is true that he was seeking for prayers and we prayed together and I believe God will do the impossible for him. Watch the space.

"He is a great musician and a minister of the gospel and we welcome his ministration just as he has been ministering in several churches.

"He is coming to minister through singing and I heard him saying he wants to stay in the church," said Bushiri.

Moholo has been at loggerheads with senior leaders of the ZCC church over the past 15 years, allegedly after he failed to stop wearing the church's uniform and to perform its trademark mokhukhu dance at gospel music festivals.

Moholo, christened Solly Molokoane, ruffled feathers when he performed the church's dance after bursting onto the music scene in 2001.

He performed clad in gear identical to the church's khaki uniform. The white takkies he wears during shows came under scrutiny as it was believed he was mimicking their trademark manyanyatha shoes.

The musician was first called to a meeting by the Soshanguve and Mamelodi branches of the church in 2001, where pastors accused him of intellectual property theft.

Bushiri and Martin, who have been warring since 2016, buried the hatchet at a hotel on Thursday.
News
3 years ago
Next Article