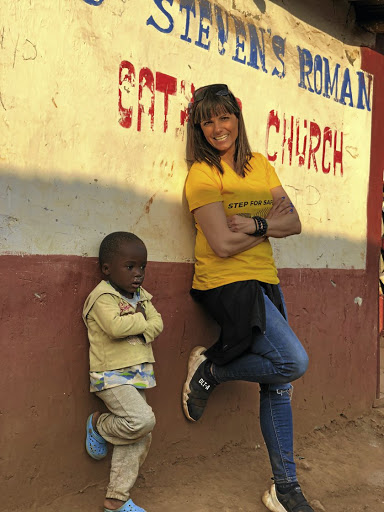 Apart from hosting Morning Live for almost 15 years, Leanne Manas has written a book, summitted Kilimanjaro and now represents SA as a goodwill ambassador for the United Nations High Commissioner for Refugees (UNHCR ).

She says the journey has taught her that even when the world throws evil at you, optimism in a better tomorrow reigns supreme. Her ambassadorship, announced two weeks ago, is her biggest achievement to date.

"Without a doubt. Working with refugees and trying to help where I can has opened my eyes and changed me forever. I have found the true resilience of the human spirit and the true meaning of life through the eyes of the most desperate people. The fact that they have managed to escape war and terror and find solace without owning a thing or having lost family along the way, is incredible! "

Her journey as a journalist led her on this path of philanthropy.

But Manas initially dreamt of becoming a radio DJ and studied drama. "It was the moment I first put my foot into a newsroom that I found my calling. My first job was at Radio 702. I started working at the traffic desk taking calls for accidents on the road. The desk was in the middle of the newsroom, so I was surrounded by [the] buzz. I worked really hard to land a job at the news desk working 'graveyard' shifts."

The 44-year-old joined the SABC2 Morning Live team in 2004 and admits she was reluctant about the job at first because she's not a "morning person".

Her most memorable interviews are with Oprah Winfrey and Nelson Mandela.

Nomzamo Mbatha gets hands on as UN refugee ambassador in Kenya

Nomzamo Mbatha on a trip to Nairobi, Kenya as ambassador for the United Nations High Commissioner for Refugees (UNHCR). Nomzamo posted videos and ...
Pic of The Day
3 years ago

In 2015 she was hand-picked by the Nelson Mandela Foundation to summit Mount Kilimanjaro in a drive to raise funds for the Take a Girl Child to School project.

"It was the most incredible physical and mental achievement! I did not think I was actually going to succeed, but the moment I put my foot on that mountain, my mind kicked into gear and I realised, 'you have come this far ... there is no way you are not going to succeed'," she says.

She says UNHCR approached her to become a high-level influencer for the LuQuLuQu Campaign in 2017. It's aimed at changing perceptions about African refugees. "It was an incredible experience that took me to some of the biggest refugee camps on the continent. I managed to broadcast live from these camps back to SA. The reaction from viewers was incredible and really eye-opening. I don't think it has ever been done before."

She says she hopes to help change the narrative of the African refugee and allow Africans to tell their own stories. Born and bred in Joburg, Manas says her dad worked several jobs to ensure that she and her brother had the best education. But more importantly, he taught her that respect and treating all people as equals was not debatable.

A married mother of two, she also wrote a book for new moms, The Antenatal Guide, and later released a DVD in 2011.

An updated version of the DVD was released earlier this month. "Being pregnant, having a baby and becoming a mom can be exceptionally daunting. Together with Rooftop Productions we decided to put together a book and easy-to-watch DVD that gives advice to new mothers - from professionals like gynaecologists, paediatricians, lactation experts, psychologists, etc."

Another feather in her cap was claiming back her physique and falling in love with road running. "I do kick-boxing and my biggest challenge was running, which I hated with passion and never believed I could run further than 100 metres. I silenced that awful negative voice in my head and have managed to run close to 125km in just three months," she says.