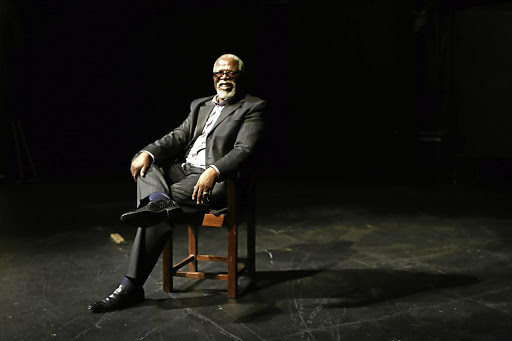 Dr John Kani (born 30 August 1942) is an acclaimed South African actor, director and playwright. Kani is photographed during an interview at The Market Theatre in Joburg.
Image: Alon Skuy

Beyoncé, Chiwetel Ejiofor and Donald Glover will be in the presence of greatness as John Kani takes on the role of Rafiki in the 2019 version of The Lion King, which releases in July.

But Kani says this time he will take pictures of the internationals to please his granddaughter.

Having also starred in Black Panther last year, the legendary 75-year-old actor says he needs to live to see 107 to be truly "legendary".

"One needs to be careful of these hats we are given. I live life as best as I possibly can, trying to make a difference.

"I am humbled by the title but feel I failed when I look around and read how children and women suffer by being raped and killed. I ask myself could I not have done more to stop this. Until I find the answer to restore humanity, only then can I say I achieved what I needed to."

Kani, who has fought injustices most of his life through art, initially set out to be a lawyer and was enrolled to study at Fort Hare University in the Eastern Cape.

But on the day he was meant to leave his New Brighton home in Port Elizabeth, his father gave him the news that his uncle had been arrested and taken to Robben Island.

"My dad wouldn't have been able to afford the tuition. I had to man up and was in charge of my own future."

The actor Black Panther actor took to Twitter to share the news on Wednesday.
Lifestyle
3 years ago

Kani says, though, that he comes from a long line of storytellers and knew he'd revel in it too. "My grandfather was a polygamist who couldn't spell polygamy. His first wife was the boring one, the second was the educated one and my favourite, always preaching about God and religion, the third one, was always making herself pretty - I loved listening to all their stories," he says.

He joined The Serpent Players where he met Athol Fugard. "We were more than just a drama group. We were soldiers on stage. We used art to speak out against injustices."

Kani says he started out as a writer for the group until he was called in 1965 to step in for another actor who was arrested on the day. "I had to perform the lead in front of 150 people. In that moment I knew this is where I belong."

In a collaboration between Kani, Fugard and Winston Ntshona, Sizwe Bansi is Dead was born in 1972. The play addressed the apartheid regime's restrictive pass laws. Kani achieved international recognition when he and Ntshona were awarded a Tony for best actor for this play as well as for The Island. But the same two works saw him being detained by the SA police for 23 days. A bigger blow was when he kissed a white woman in Miss Julie. He was met with numerous death threats and he was stabbed 11 times.

"Our parents were worried . But we were black people first and being arrested was sort of a victory - your first stripe - and the second stripe would be to join our comrades at Robben Island. It was affirmation that we were on the right path."

He speaks fondly of the Indian and white doctors who saved his life by treating him in a private section of the hospital so police wouldn't find him. "I have searched for them all this time just to say thank you."

He was determined to change the lives of underprivileged talent who couldn't afford to study and opened up the Market Theater Laboratory. "I was flooded with hundreds of scripts from talented people who lacked the skill because of bantu education. I would ask them to relate their scripts in their mother tongues. I am proud that the school turns 30 this year and I was able to see about 200 actors who have gone on to become remarkably successful. I still make it a point to attend the graduation every year."

His new work, Kunene and The King, will make its world premiere at the The Royal Shakespeare Theatre in Stratford, UK, in March. "It took me almost a year to write Kunene and The King - I write by hand. I'm not dying any time soon. I have not won that Oscar yet," he jokes.