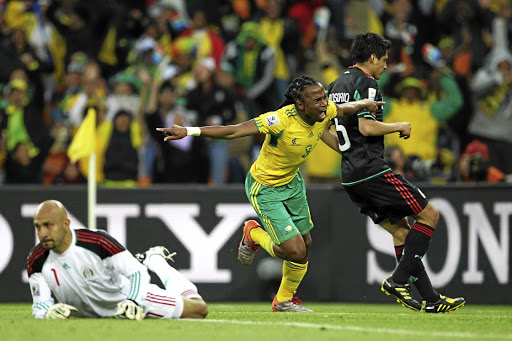 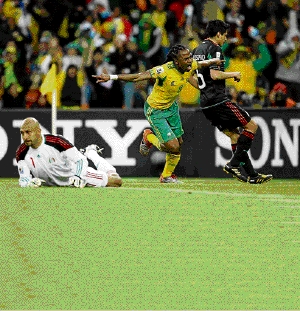 Bafana Bafana supporters who camped outside Siphiwe Tshabalala's grandparents' house on the eve of World Cup 2010 inspired him to score his world-famous opening goal for Bafana Bafana against Mexico at FNB Stadium.

Vuvuzela-blowing SA fans had gathered outside his grandparents' home in Phiri, Soweto, on the Thursday before Bafana took on Mexico in the opening match at Soccer City, where Shabba etched his name in the history books with a thunderous left-foot strike.

Thursday will mark exactly a decade since that memorable day, and Tshabalala, speaking to the media yesterday, recalled he had been taken by surprise to hear fans had converged outside his grandparents' Soweto home to wish the team well.

"Matchday was normal routine, wake up... take a shower and breakfast then go back to the room and rest," Shabba recalled of June 11 2010. "I then received a call from my family that the previous day, a group of supporters gathered at my grandparents' house in Phiri, where I grew up.

"They were wearing the national team colours, waving flags and blowing vuvuzelas showing their support. That touched me."

Siphiwe Tshabalala may be down but he's not out

The absence of competitive football has aggravated clubless Siphiwe Tshabalala's situation as he could have found a team by now.
Sport
1 year ago

He then seized the moment to become the first player to score in a World Cup hosted in Africa, although Bafana could not secure a victory as they tied 1-1 with Mexico in the Group A opener.

The 35-year-old says that goal will remain part of his legacy as he united people in the country 10 years ago.

"Remembering the goal, some people were in the taverns, fan parks. I watched videos over and over again where people were celebrating, jumping and hugging each other and it makes me emotional and proud as well that I did make an impact in people's lives. I will be forever grateful."

The ex-Kaizer Chiefs midfielder revealed he was nervous when they left their hotel in Sandton for the stadium in Nasrec.

"Sandton was like a ghost town and there was no one. It was just us with the police convoy. We only saw people in a fan park [in Sandton] and from there [the] M1 was quiet until we arrived in Diepkloof.

Then it was colourful and then you can imagine the nerves. "Kagisho Dikgacoi sang on the bus like we normally do but the singing was different because it was emotional. We were happy and we were passionate as well.

"We were so eager to be on the field because of the fans. When we went onto the field for a warm-up it was great. I was nervous. Scoring that goal, the noise at the stadium, the emotions, like, I was in my world."

Bafana finished Group A with four points and could not make it to the second round.

Shabba's goal was nominated for the Puskas Award.