The biggest problem that we have is we don’t play: Gavin Hunt 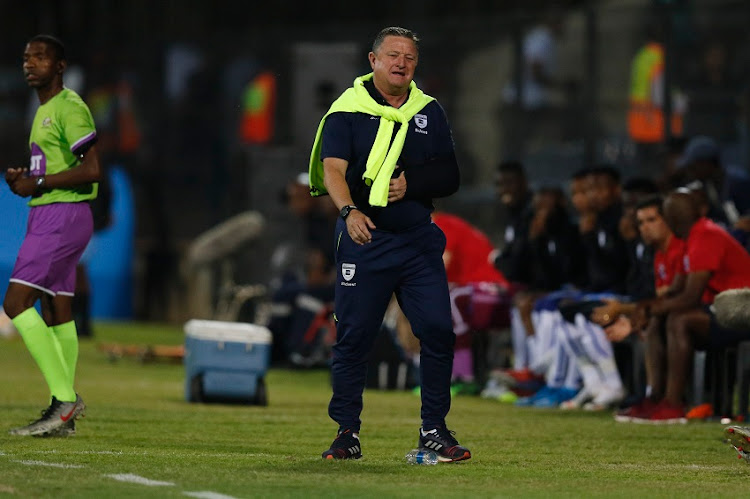 Bidvest Wits coach Gavin Hunt says the backlog of matches his team faces‚ and their inactivity in the Absa Premiership‚ has affected their rhythm.

Wits needed an injury-time penalty to earn a 1-1 draw against Highlands Park at Makhulong Stadium on Tuesday night and Hunt said his team clearly looked rusty.

Compounding the cup and Fifa international breaks in the league that other teams have also suffered‚ Wits’ rhythm in the PSL has also been affected by competing in the Caf Confederation Cup‚ where the Clever Boys meet Guinea’s Horoya in their first Group C match at Bidvest Stadium on Sunday.

Wits are alone on just eight matches (fifth place on 16 points) when the next-least played is 10 - some teams have played 12 games.

And earning points from catch-up games is proving difficult.

Hunt was not complaining at a contested penalty awarded for an apparent hand-ball by Bevan Fransman in injury time to allow Thabang Monare to equalise from the spot in the 92nd minute against Highlands.

The draw saw Wits avoid slipping to two defeats in succession‚ having conceded late for a 1-0 home defeat to SuperSport United before the Fifa break.

He believes‚ as games come faster for his team in December‚ they can turn league matches in hand into points and be among the challengers by Christmas.

“The biggest problem that we have is we don’t play. So we can see how rusty we are.

“And as this game went on‚ we got better. We’ll start getting better now. Because we are playing.

“We play Sunday [against Horoya]‚ we play next week [against Djoliba in Mali on Sunday‚ December 8]. And we need that. We’re not playing any football.

“But now we’ll play too much football. But that’s OK. We’ll get better‚ I know‚ once we play more football.”

Peter Shalulile had put Highlands ahead from the spot in the 41st minute.