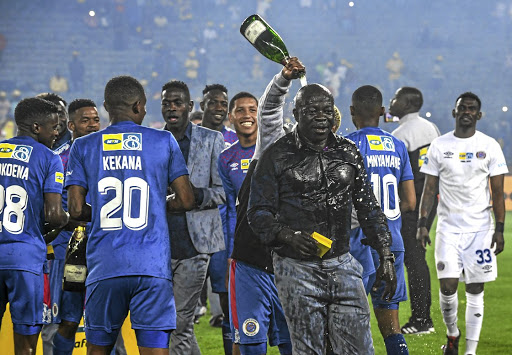 Kaitano Tembo, coach of SuperSport United, is showered with champagne by his players after winning the MTN8 final against Highlands Park at Orlando on Saturday. It was Tembo's first cup as head coach.
Image: Sydney Seshibedi/Gallo Images

SuperSport United coach Kaitano Tembo has made it clear that their MTN8 triumph celebrations will only be temporary as they aim to focus on challenging for the league title.

SuperSport edged Highlands Park 1-0 at Orlando Stadium at the weekend to clinch their second MTN8 trophy in three years, thanks to Bradley Grobler's neat header on the stroke of half-time.

"Today and tomorrow we'll go out and celebrate, but Monday we're back again," Tembo said on Saturday. "After this success we want to give our all to fight for the league title."

SuperSport first won this cup in 2004. Matsatsantsa were also crowned the champions in 2017, before losing it to Cape Town City on penalties last year.

"We always try to be humble and keep our feet on the ground. We've got a young team... young players coming up... They can easily get excited," noted Tembo.

Sihle Ndebele reflects on how SuperSport got the better of the Lions of the North in Saturday's MTN8 final. Experience While it was Highlands' ...
Sport
2 years ago

"But it's our responsibility to always tell them, to remind them, that you are as good as your last game."

Having won the top-eight cup as a player at the same club in 2004, Tembo has now achieved a rare feat of winning this trophy both as a player and as a coach.

This MTN8 is also Tembo's maiden trophy as a head coach, having been handed the reins on a full-time basis in August last year after serving as a caretaker for nearly six months.

Tembo, 49, paid homage to the coaches he's assisted at the Tshwane-based outfit over the years. "I worked with a lot of coaches. Throughout when I was an assistant coach, I always made sure I support whoever I work with," said Tembo. "I worked with Gavin Hunt, Gordon Igesund, coach Pitso Mosimane, I have worked with Stuart Baxter.I thank them."