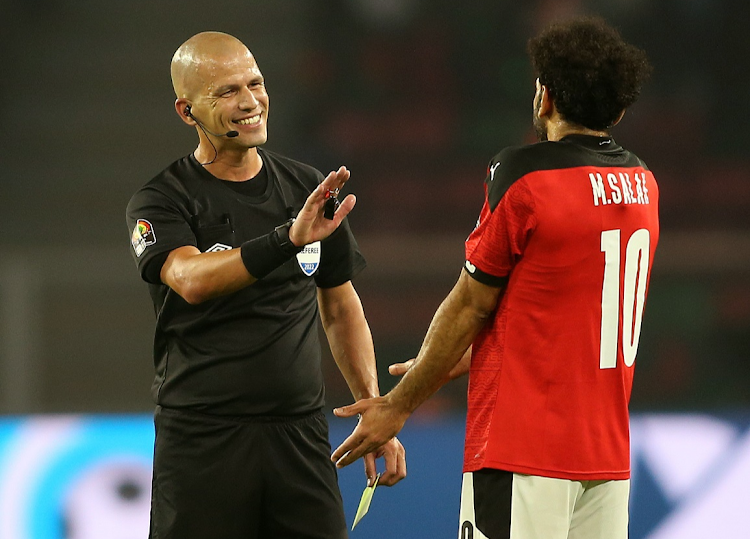 Victor Gomes says he assessed the situation and found a way to “manage a top-class player in a way I thought would be deemed appropriately responsible” when he offered to hand his whistle to Egypt's star player Mohamed Salah in Sunday's 2021 Africa Cup of Nations final.

Gomes became the first South African to referee a Nations Cup final and the reviews were that he handled Senegal's penalties win against Egypt with aplomb at Olembe Stadium in Yaounde, Cameroon, on Sunday night. He was assisted by SA's Zakhele Siwela and Souru Phatsoane of Lesotho.

At one point Salah complained to the referee, who, with his trademark flamboyance so well known to South Africans, offered the Liverpool star and global playing giant his cards and whistle in a symbolic gesture.

“I respect all the players I officiate with, and I don't like to talk about decisions I make on the field. However, I do like to highlight some points for educational purposes,” Gomes said in a press conference at Safa House on Thursday which feted the referee and Siwela for their achievements.

“Football has evolved tremendously in the past 10 to 20 years. The players have evolved, if you look at the salaries they earn, and they are highly respected. We are talking about top players [who play for clubs] around the world, not only in Africa.

Just referee Victor Gomes offering to hand over his whistle and cards to Mo Salah after he went over to complain about a decision... 😳

“And I think that refereeing also has to evolve. We cannot stick to the old officiating and management styles.

“So all I can say is that on Sunday I chose to manage a top-class player in a way I thought would be deemed appropriately responsible, and I think football was the ultimate winner on the day.”

Gomes, young for a referee at 39, expressed pride at the biggest milestone in his career so far.

“I’m happy for Zakhele and myself, not forgetting my colleague from Lesotho, Souru — these two are my brothers when we go to war, and it just makes the game a bit easier when you all know what you’re doing and you’re in sync.

“People think you wake up one day and you get a final. It doesn’t work like that. It’s lots of seminars. It’s been a long journey, and to get there takes a minimum eight years.

“So I guess Sunday will be one that I will never forget.”

When South African 🇿🇦 referee Victor Gomes, who officiated the AFCON 2021 final, handed Salah the whistle to take over, little did he know that he was inspiring others.

This is Shamirah Nabadda in Uganda during a Women’s League tie. 😂😂

Experienced referee Victor Hlungwani said he was part of the professional panel in SA when Gomes and Siwela made their starts in officiating.

“I call them my boys — they found me in the referees' panel. Gomes arrived in 2009, I was the fourth official appointed to guide him by [ex-Safa referees chair] Ari Soldatos. And the seeds that I planted that day, I'm so happy to enjoy [how they grew]," Hlungwani said.

“Zakhele came in 2001, and I was there in the panel to welcome him as a very young boy. When he refereed in Thembisa we would take him home.

“And I'm so happy today to be celebrating their achievement.”